L.L.Bean Announces Summer in the Park 2017 Schedule Including Concerts, Family Activities, and Festivals at its Freeport Flagship 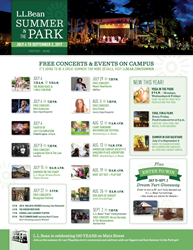 2017 Summer in the Park Schedule

L.L.Bean has announced its annual Summer in the Park schedule, packed with activities to help locals and visitors alike make the most of summer in Maine. New events this year include free morning yoga sessions and outdoor movie nights, in addition to free concerts with Grammy Award winning artists. The Maine outdoor company is celebrating the 100th anniversary of its flagship store by transforming its retail campus into a summer destination with something for everyone, from a kids’ woodland village to dog comfort stations.

Free yoga sessions in Discovery Park will be offered every Monday, Wednesday and Friday at 8 AM and every Friday night there will be food trucks and outdoor entertainment from live presentations to feature films.

L.L.Bean will also host several fundraisers for charitable organizations, including the brand new Camp Sunshine Watermelon Festival on August 12, complete with seed-spitting contests and more. The American Cancer Society brings its Amazing Place Adventure Race to Freeport on August 13, and the Save a Stray 5K on August 26 will benefit the Coastal Humane Society.

The 105-year old company opened its store on Main Street in Freeport in 1917. Still in its original location, the store is open 24 hours a day, 365 days a year, and welcomes over 3 million visitors each year.

About L.L.Bean, Inc.
L.L.Bean, Inc. is a leading multichannel merchant of quality outdoor gear and apparel. Founded in 1912 by Leon Leonwood Bean, the company began as a one-room operation selling a single product, the Maine Hunting Shoe. Still family owned, Shawn Gorman, great grandson of Leon Leonwood Bean, was named Chairman of the Board of Directors in 2013. While its business has grown over the years, L.L.Bean continues to uphold the values of its founder, including his dedication to quality, customer service and a love of the outdoors. In the past five years, L.L.Bean has donated over $6 million toward conservation and land stewardship. L.L.Bean operates 34 stores in 16 states across the United States, along with 25 stores in Japan. The 220,000-sq. ft. L.L.Bean retail store campus in Freeport, ME, is open 24 hours a day, 365 days a year and welcomes more than 3 million visitors every year. L.L.Bean can be found worldwide at http://www.llbean.com, Facebook, Twitter, YouTube, Pinterest, Google+ and Instagram.