In August, Left Bank Writers Retreat in Paris will produce “Hemingway’s Wyoming,” a weekend writing retreat and literary travel experience near Sheridan, Wyoming, at the Spear-O-Wigwam dude ranch where Hemingway worked on “A Farewell to Arms.” The small-group retreat will explore Hemingway’s history in Wyoming in advance of a 2018 statewide celebration of the author’s first visit 90 years ago. 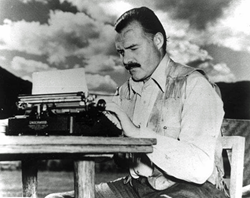 Ernest Hemingway first came to Wyoming in 1928 to stay at Spear-O-Wigwam dude ranch in the Bighorn Mountains where he could fish and finish "A Farewell to Arms." This summer, the dude ranch will be the setting of the Wyoming weekend writing retreat “Hemingway’s Wyoming,” Aug. 11 – 13, 2017, announced Left Bank Writers Retreat founder and director Darla Worden, who is producing the writers' weekend. The retreat begins and ends in Sheridan, Wyoming.

“I’ve spent years introducing writers to Hemingway’s favorite Paris spots each June with the Left Bank Writers Retreat,” says Worden, “but he also has a rich history in my native state of Wyoming. This smaller-scale retreat offers writers who might not have the time or budget for a trip to France to work firsthand with Hemingway’s writing techniques while experiencing some fascinating and less well-known aspects of his past.”

The price for the three-day weekend retreat is $449 per person and includes transportation to and from Sheridan to Spear-O-Wigwam, accommodations in rustic cabins, all meals on Friday and Saturday, breakfast on Sunday, canoes, morning writing exercises and workshops and evening readings. Writers are responsible for their transportation to Sheridan (air service from Denver available on Denver Air Connection http://www.denverairconnection.com/). The retreat is intended for all levels of writers interested in the genres of fiction, memoir and poetry. Group is limited to 8 participants.

Worden’s book Finding Hemingway: One woman’s Wyoming-to-Paris search for Papa will be published next year. Her article about the famous author’s visits to the state, “Hemingway’s Wyoming: A Cockeyed Wonderful Country,” appeared in Big Sky Journal magazine. Following in Hemingway’s Wyoming footsteps doing research for the article and book gave rise to the idea for the weekend retreat. “Many of even the most avid Ernest Hemingway fans aren’t familiar with his deep connection to Wyoming,” says Worden. “And it’s inspiring to write at the historic Spear-O-Wigwam dude ranch where he actually wrote and fished.”

Documentary filmmaker Ken Burns will debut a new documentary about Hemingway in 2019, and in 2018, Wyoming will host a statewide celebration honoring the 90th anniversary of Hemingway’s first fateful trip to the state.

About Left Bank Writers Retreat's "Hemingway's Wyoming" weekend:
A sample itinerary for the August “Hemingway’s Wyoming” weekend and option to reserve space with a $200 deposit is available on the Left Bank Writers Retreat website. Founded and hosted by Worden, the Left Bank Writers Retreat is named for the now-famous writers who lived on Paris’s Left Bank during the 1920s, writing and congregating in the city’s cafes and bars to share ideas. The six-day small-group writing workshop and literary tourism experience, held in Paris, France, each June, focuses on the writing techniques and literary landmarks of Hemingway and his cohort of expatriate friends. For more information, visit http://www.leftbankwritersworkshop.com.

Darla Worden is editor of Mountain Living magazine and a writer who lives in Denver, Colo. Worden has written widely for magazines and authored several books.

“Hemingway’s Wyoming” weekend writers retreat will take place at the Spear-O-Wigwam dude ranch near Sheridan, where Hemingway completed “A Farewell to Arms” (photo by Travis Cebula).

Offered by Left Bank Writers Retreat in Paris, a Wyoming writers weekend will visit the cabin at the Spear-O-Wigwam dude ranch where the author stayed in 1928 (photo by Travis Cebula).

Taking place at the base of the Bighorn Mountains Aug. 11-13, 2017, “Hemingway’s Wyoming,” a writers retreat hosted by Darla Worden, explores the region’s literary history.