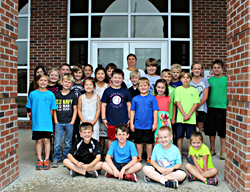 Screven Elementary Principal Shawn Yeomans was instrumental in getting the school staff voting daily and participation of several other schools in her district. She shared her excitement by saying “I think it is awesome that your company has not only developed a unique playground idea to expand the minds of our youth, but you also offer opportunities for a chance to win such an amazing playground! I was astonished by the fact that our little school of 250 students, with the overwhelming help of our seven other schools, was able to accomplish this feat!"

She goes on to say, “I can’t thank Imagination Playground enough for this wonderful and worthwhile project and I know that our students are going to love playing and exploring with this new equipment.”

David Krishock, President & CEO of Imagination Playground offered his congratulations and applauded the school’s ability to rally the community, “It’s amazing that Screven was able to get the support of seven other schools to help support their voting efforts. That’s what the Vote for Play contest is all about, getting communities involved to support their favorite school or family center.”

Krishock goes on to say, “With the principal’s dedication and community support, the students of Screven Elementary will be enjoying their new Imagination Playground for the start of the new school year!”

Imagination Playground’s Vote for Play contest is held multiple times a year, allowing communities to vote for their favorite school or family center to bring an Imagination Playground to the children they serve. Community members can vote once a day, every day, throughout each voting session.

To learn more about the creative play offered by Imagination Playground, or to bring the Big Blue Blocks to a school or family center, call 1-678-604-7466 or email ContactUs(at)ImaginationPlayground(dot)org.