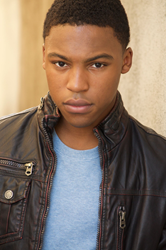 I've been a fan of Amandla's since 'The Hunger Games' so what an incredible opportunity to be able to work with her -McCarrie McCausland.

The film is an adaptation of Alexandra Bracken’s YA trilogy of the same name. After a mysterious disease kills 98% of America's children, the surviving 2% develop superpowers but are taken by the government and held in internment camps. Sixteen-year-old Ruby (Amandla Stenberg) escapes her camp and joins a group of other gifted teens on the run from the government.

When asked about landing this role, McCausland said, "I've been a fan of Amandla's since 'The Hunger Games' so what an incredible opportunity to be able to work with her. Really the entire cast is full of talent. This is an amazing project."

McCausland most recently starred in the NBC drama, 'Game of Silence', created by David Hudgins. He has also held recurring roles on the ABC/Lifetime hit drama Army Wives, and The CW’s 'The Originals'. McCarrie McCausland is represented by Bold Talent, Cunningham, Escott, Slevin & Doherty, and Luber Roklin Entertainment. The film is currently shooting in Atlanta, GA, and is scheduled for a 2018 release.