The Best Professional Services Automation Software According to G2 Crowd Spring 2017 Rankings, Based on User Reviews 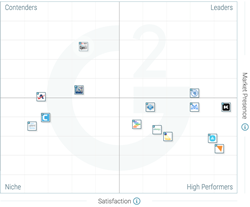