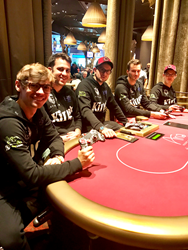 With over 90% of professional esports gamers in the world using a SCUF controller, we have a long history of supporting professional athletes with the best competitive gaming equipment to support their runs to victory.

Scuf Gaming, global leader and innovator in video gaming controllers, announces its partnership with the top five German poker players attending the Super High Roller Bowl in Las Vegas, including Fedor Holz, one of the world’s top poker players and currently 7th in the world for all time money list, Rainer Kempe, winner of last year’s Super High Roller Bowl, and top players Steffen Sontheimer, Christian Christner, and Koray Aldemir. The five German players will all wear the SCUF logo during the tournament, taking place at ARIA Resort & Casino in Las Vegas, May 28 - June 1. The Super High Roller Bowl is considered the world championship of high stakes poker where the world’s top players compete for a prize pool of $16.8 million and the winner walks away with $6 million as well as the coveted Super High Roller Bowl championship ring. Bringing some celebrity star power to this year’s event, world renowned actor and comedian Kevin Hart rounds out the 56-player field.

Fedor Holz, Professional Poker Player and Co-Founder of Primed Mind said, “In my downtime, I love to play Call of Duty, Overwatch and FIFA to cool down and take a mental break from poker tournaments. With my competitive nature, I love focusing on being the best so playing with the best equipment is essential - SCUF has, by far, the best controllers! It’s a natural fit for me, Rainer, Steffen, Christian and Koray as we love to play video games together and we’re thrilled to have SCUF on board for the Super High Roller Bowl.”

After last year’s Super High Roller Bowl, Fedor sought a new challenge and decided to create the mindset coaching app, Primed Mind. The Primed Mind app uses the the same mental coaching techniques that his mental coach, Elliot Roe, has used to train Olympic Athletes, Esports Pros, High Stakes Poker Players, UFC Champions and Business Executives. Fedor shot to the top of the poker world in a matter of a few years and, to date, has amassed over $20 million in career earnings. Fedor credits much of his success to mental coaching, building confidence and becoming a better athlete while unlocking mental, physical and emotional strengths.

Duncan Ironmonger, CEO and Founder of Scuf Gaming has a similar outlook to science and focus when it comes to being the best. “We call the science behind competitive gaming SCUFOLOGY, connecting the brain, hand and eye with our intelligent controller. Our DNA is centered around designing gaming peripherals that increase hand use while improving comfort and gameplay in a safe, intuitive and ergonomic way. SCUF believes the power of the tools professional athletes use is key to their success.”

“We’re delighted to support Fedor, Rainer, Steffen, Christian and Koray in the Super High Roller Bowl. With over 90% of professional esports gamers in the world using a SCUF controller, we have a long history of supporting professional athletes with the best competitive gaming equipment to support their runs to victory. We’re looking forward to watching the guys compete at their highest level during this year’s Super High Roller Bowl,” said Duncan Ironmonger, CEO & Founder of Scuf Gaming.

About Scuf Gaming
Scuf Gaming®, global leader and innovator of gaming peripherals and winner of eSports Industry Awards for “Best Hardware” in 2016, provides tactical gear for competitive gamers where over 90% of the top professional gamers in the world use SCUF. Selling high-end accessories and customized gaming controllers for console and PC, SCUF offers a number of functional and design features custom built to increase hand use and improve gameplay. Built to specification, SCUF controllers cater to competitive and casual gamers who recognize that one size does not fit all. The SCUF controller has features, which are covered by 29 granted patents, and another 68 pending; protecting 3 key areas of a controller; back control functions and handles, trigger control mechanisms and thumbstick control area. For additional information, please visit http://www.scufgaming.com.