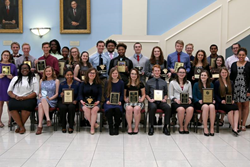 After topping George Mason University for the overall titles in both the NDT and the CEDA earlier this spring, Liberty was recently announced the winner of the ADA’s grand sweepstakes, again ahead of George Mason.

This year’s debate topic was “Resolved: The United States Federal Government should establish a domestic climate policy, including at least substantially increasing restrictions on private sector emissions of greenhouse gases in the United States.” Examples of arguments students researched and presented are cap and trade policies, carbon taxes, and renewable fuel standards.

About Liberty University
Liberty University, founded in 1971, is the largest private, nonprofit university in the nation, the largest university in Virginia, and the largest Christian university in the world. Located near the Blue Ridge Mountains on more than 7,000 acres in Lynchburg, Va., Liberty offers more than 550 unique programs of study from the associate to the doctoral level. More than 250 programs are offered online. Liberty’s mission is to train Champions for Christ with the values, knowledge, and skills essential for impacting tomorrow’s world.