Owner and avid marathon runner to run the “World’s Highest Marathon” on May 29. 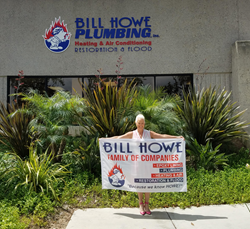 Tina Howe Embarks on the Everest Marathon Journey Bringing Bill Howe Family of Companies with Her!

I get to immerse myself in the panoramic views of the Himalayan mountains while doing what I love, running.

The Bill Howe Family of Companies started with Bill Howe and Bill Howe Sr. as AM/PM Sewer & Drain cleaning in San Diego. They had a handful of employees and operated out of a tiny studio in Pacific Beach when Tina joined the company, freshly arrived from England. 37 years later, the company has grown to a full home service operation in San Diego for plumbing, heating & air, epoxy drain relining solutions, and restoration & reconstruction. Bill and Tina Howe have also built it as a true family company; three of their daughters are in leadership roles after 10 years in the company, their niece is the Human Resource Manager with 20 years in the company, and many of the employees work alongside their own families within the company of 170 employees.

The Tenzing-Hillary Everest Marathon is held annually and begins in Kathmandu. It is a three-week event, where runners acclimatize to the changing elevation in a systematic method while trekking from the Capital city to Everest Base Camp where the race begins. The starting point elevation at Everest Base Camp is 17,598 ft. and at the finish of the 26.2 marathon, the elevation at Namche Bazaar is at 11,306 ft. Runners will also travel two uphill portions in the race to 18,200 ft. at Kalapatthar where they will enjoy the best views of Everest. The marathon is held in the honor of Edmund Hillary and Tenzing Norgay Sherpa, as they were the first to reach the summit on May 29, 1953.

Tina Howe helped to build the company’s division in drain cleaning in San Diego, and then plumbing, heating, cooling, and more along with raising her family. However, she didn’t begin running marathons until the age of 40. Since her first race, she has completed a marathon on every continent, including the Great Wall Marathon and Kilimanjaro. She has also completed a marathon in 26 states and plans on completing all 50 states by the time she turns 60. “I have always wanted to hike Everest,” said Tina Howe, Vice President of Bill Howe Family of Companies. “Participating in the Everest Marathon is even better. I get to immerse myself in the panoramic views of the Himalayan mountains while doing what I love, running.”

Tina has been sending regular updates about her journey and sharing through social media on the Bill Howe Family of Companies Facebook Page. In addition to being an avid marathoner, Tina Howe is also a highly-recognized leader in the San Diego plumbing industry. She has been named as a Woman of Influence, and recognized with several local honors.