Nearly $1,000,000 in funding will be awarded to both experienced and emerging young scientists in the Parkinson’s field. 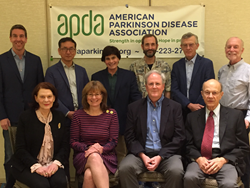 “APDA is committed to investing high impact science that can change the course of this disease,” commented Dr. David G. Standaert, Chairman of the SAB.

The American Parkinson Disease Association’s Scientific Advisory Board (SAB) met this week to review more than eighty-nine grant submissions all vying for nearly $1,000,000 in funding that will be awarded to both experienced and emerging young scientists in the Parkinson’s field.

The American Parkinson Disease Association (APDA) is focused on advancing scientific research that will support its mission to provide the support, education, and research that will help everyone impacted by Parkinson’s disease live life to the fullest. “APDA is committed to investing in high impact science that can change the course of this disease,” commented Dr. David G. Standaert, Chairman of the SAB. “As we evaluate these proposals we focus on funding researchers who are at the start of their Parkinson’s research career. Our aim is to accelerate research and support translational ideas that have the potential to truly improve the quality of life and make a difference."

APDA's SAB is comprised of scientists with a wide array of backgrounds and expertise in all areas relevant to Parkinson's disease (PD) whose research holds promise to discovering new insights etiology and treatment of the disease. Post-Doctoral Fellowships are awarded at $35,000 per year, while Research grants are awarded at $50,000 per year. Additionally, the prestigious Dr. George C. Cotzias Fellowship is a $240,000 grant given over three years to support promising young physicians and researchers who are rising stars working to establish their careers in research, teaching and patient service relevant to the problems, causes, prevention, diagnosis and treatment of PD and related neurological movement disorders.

This critical research funding is only possible due to the financial support from APDA’s steadfast supporters and the dedicated work of the SAB who gather on a regular basis to diligently review and recommend funding the most cutting edge projects.

The SAB meeting included research presentations from four of APDA’s 2016-2017 grantees who each represent a vast diversity of PD research areas.

Findings from either of these studies could potentially lead to drug development that might help slow down PD progression.

APDA Research Grantees:
Beom-Chan Lee, PhD, University of Houston: The SAB was enthused to see the progress made by Dr. Lee in his work to assess the impacts on long-term rehabilitative training for people with PD who receive in-home balance exercises with assistive guidance via the smartphone-based biofeedback system, called Smarter Balance System (SBS). This work is investigating the effects of improved postural control and how that carries over to confidence in daily activities and less fear of falling.

https://www.apdaparkinson.org/research/investigators/hannes-devos-phd/, Kansas University Medical Center: Dr. Devos is comparing the cognitive workload during simple and challenging cognitive tasks between individuals with PD and controls with no neurological condition to understand if those with abnormally high Task Evoked Pupillary Response or TEPR values may be at risk of early cognitive decline. If successful, this TEPR evaluation could alert clinicians very early to cognitive changes that would otherwise go unnoticed.

The American Parkinson Disease Association (APDA) proudly invests in the most promising clinicians and scientific projects focused on the discovery of the cause(s) and finding the cure for Parkinson’s disease. APDA is committed to scientific research and has been a funding partner in most major Parkinson’s disease scientific breakthroughs, investing more than $46 million in research since 1961. Many APDA-funded researchers have successfully leveraged pilot data to secure multi-million dollar grants through the National Institute of Health.

The announcement of 2017-2018 grant funding will take place in August.

About the American Parkinson Disease Association
The American Parkinson Disease Association (APDA) is the largest grassroots network dedicated to fighting Parkinson’s disease (PD) and works tirelessly to assist the more than 1 million Americans with PD live life to the fullest in the face of this chronic, neurological disorder. Founded in 1961, APDA has raised and invested more than $170 million to provide outstanding patient services and educational programs, elevate public awareness about the disease, and support research designed to unlock the mysteries of PD and ultimately put an end to this disease.