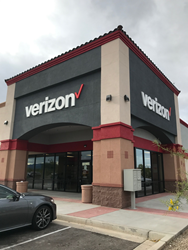 Cellular Sales' store in Surprise Village Marketplace is the company's second store opening in Arizona in 2017.

The Greater Phoenix area presents a great opportunity for our business, and we’re doing what we can to increase our presence in this market.

The new store is located at 16487 West Bell Road in Surprise Village Marketplace. It opened on March 31. In February, Cellular Sales opened a new store in Chandler, the company’s second store in the Grand Canyon State.

“We came to Arizona last year, and we’re already seeing tremendous growth,” said Cellular Sales Regional Director Aaron Clark. “The Greater Phoenix area presents a great opportunity for our business, and we’re doing what we can to increase our presence in this market.”

Founded in Knoxville, Tenn. in 1993, Cellular Sales has experienced incredible growth over the past several years. Started as a single store, the company’s store count now surpasses 600 locations while employing more than 5,000 people. Cellular Sales’ growth received recognition from Inc. Magazine by being named to its Inc. 5000 list as one of the nation’s fastest-growing privately owned retailers eight times.

“We try and focus on putting the customer first from the second they walk in the door to the shopping experience as a whole,” Regional Director Seth Baldwin said. “We are really looking forward to serving the Surprise community and the people of Greater Phoenix.”

Cellular Sales seeks to hire motivated sales professionals with a passion for customer service to work at its Surprise store. Those interested in applying for jobs at Cellular Sales in Surprise may contact Seth Baldwin at (336) 905-0488 or seth.baldwin(at)cellularsales(dot)com.

About Cellular Sales
Headquartered in Knoxville, Tenn., Cellular Sales was founded in 1993 and has been named by Inc. Magazine as one of the nation’s fastest-growing privately owned retailers for eight of the past nine years. The company currently employs nearly 5,000 people and operates approximately 600 stores nationwide. Job seekers may visit jobs.cellularsales.com. For more information on the company, visit cellularsales.com.