California Girls Are The Friendliest In The United States, Reveals Chatrandom Study

Chatrandom’s new “Timeframe Metric” data shows the length of time girls from each state across the U.S. spend on each connection before hitting the next button 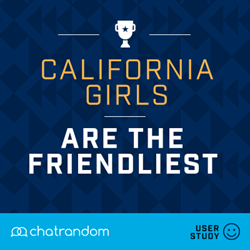 The “Timeframe Metric” analyzes the behavior of users on the platform by recording the location, gender, and time spent on each connection for every user on the platform while allowing each user to remain anonymous. The study uses data recorded from the metric between November 2015 and April 2016 which met three criteria. For inclusion in the study, a user must: reside in the United States, be female, and have established at least two connections. Over 100 million users met all three criteria for inclusion in this study.

California came out on top as home to the friendliest girls in the United States with an average connection time of 15 minutes 8 seconds before clicking the “next” button to establish a new connection. At the bottom of the list is New York with an average connection time of just 1 minute 13 seconds. Only three states averaged over 14 minutes; Mississippi (14:37), Washington (14:08), and Wisconsin (14:07). Interestingly, only New York and New Jersey (1:56) averaged under two minutes per connection. The full list of average time spent per connection by each state is available in the study.

“The data gained from the implementation of the Timeframe Metric is invaluable for understanding the behavior of our users and continually improving our service,” said Chatrandom PR Director, Shea Robins, “The data also allows us to create studies such as this one which offers a great insight into the behavior of females from each state and which states are home to the friendliest girls.”

About Chatrandom
Chatrandom is a 100% free chat site and mobile application which randomly connects people from all over the world via webcam. The service offers unique features such as the ability to only connect with users from an individual country and lightning fast connections to quickly go from one random webcam to another. Chatrandom is available in a web browser, the iTunes Apple Store, Google Play, the Windows Store, and as a Google Chrome App.