Over 80 countries plan to invest in space in the coming years, spending $79 billion by 2026, according to Euroconsult's latest report 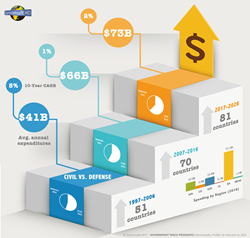 According to Euroconsult's newly released research report, Government Space Programs: Benchmarks, Profiles & Forecasts to 2026, global space budgets totaled $62.2 billion in 2016, down 2% from the previous year. Governments launched 75 satellites, less than the historical peak of 2015 but in line with the last five year average.

"The good news is that 2017 should mark a turning point with budgets recovering growth after five years of erosion," said Steve Bochinger, COO at Euroconsult and editor of the report. "The last few years were marked by opposing trends between countries boosting their spending and those forced to apply cost-cutting measures. Most countries, especially the leading ones, should converge into a new investment cycle that should drive up investments in space programs globally for the coming years." The report forecasts global spending to grow to an estimated $79 billion invested annually in government space programs by 2026.

The number of countries investing in space is steadily increasing, with 70 countries in 2016, up from 47 a decade ago. In the coming years over 80 countries are planning to invest in space technologies and capabilities, showing that governments consider space a valuable investment to support their national socio-economic, strategic and technological development.

Along with a strategic outlook containing global trends and detailed profiles of top space programs, Government Space Programs: Benchmarks, Profiles & Forecasts to 2026 assesses current and future trends for each major space application. Key findings of the report include:

About the Report
Government Space Programs: Benchmarks, Profiles & Forecasts to 2026 provides an extensive view of the economic, policy and programmatic trends of government space programs with a strategic outlook containing global trends, forecasts and benchmarks by country, region and application; a comprehensive analysis of current and future trends in space applications globally, by country, and by region; and detailed profiles of the top 15 space programs.

About Euroconsult
Euroconsult is the leading global consulting firm specializing in space markets. As a privately-owned, fully independent firm, we provide first-class strategic consulting, develop comprehensive research and organize executive-level annual summits for the industry. With 30 years of experience, Euroconsult is trusted by 600 clients in over 50 countries. Euroconsult is headquartered in France, with offices in the US, Canada and Japan.