See and Be Scene at Del Mar’s Summer Racing Season

Top-tier concerts, Thoroughbreds and craft food and beer festivals are in store during an entertainment-packed summer 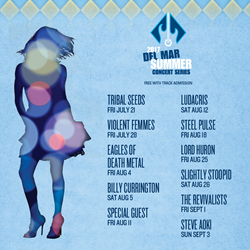 Del Mar is looking ahead to its highly anticipated summer meet filled with concerts and events that will bring thousands of locals and vacationers to the famous seaside track for the unparalleled summer scene of big bets and even bigger hats, ice-cold cocktails and elite entertainment. The seven-week meet is the official kick-off to summer in San Diego with Opening Day on Wednesday, July 19, and the action continues through to Labor Day Monday, September 4.

More than 40,000 fans are expected for Opening Day at Del Mar, a long-standing summer tradition in San Diego known as one of the most fabulous, fashionable and fun festivities in the west. The famous Opening Day Hats Contest will turn heads, as many fashion-forward trendsetters will strut their finest and most extravagant attire for the big day.

The excitement will continue throughout the season with free concerts from some of the nation’s best musicians, festivals featuring locally crafted cuisine and award-winning beers that San Diego is known for, along with many of the nation’s top horses, trainers and jockeys. With every week presenting something new to discover, spending a summer afternoon at Del Mar is always a winner.

Offering some of the best entertainment in the region, Del Mar’s Summer Concert Series gives music-goers the chance to catch a free show every Friday and select Saturdays and Sundays throughout the season. This year’s lineup features an impressive array of talent, including long-time hip hop star Ludacris on Saturday, August 12, one of America’s favorite alternative bands, Violent Femmes, on Friday, July 28, indie rockers Lord Huron on Friday, August 25 and The Revivalists on Friday, September 1, country-star Billy Currington on Saturday, August 5, along with EDM-star Steve Aoki on Sunday, September 3.

All performances will take place in the seaside concert area, located at the west end of the grandstand. Performances begin shortly after the last race of the day and are presented by Coors Light. All concerts are 18 and up and free with the purchase of standard $6 racetrack admission. For concertgoers entering after the day’s final race admission is $20.

Guests should be sure to arrive in advance of the Friday concerts so they can enjoy a Del Margarita or two during Happy Hour, featuring half off of all Del Mar’s signature drinks until 6 p.m. every Friday throughout the season.

In addition to being the perfect place to enjoy top-tier entertainers, Del Mar brings together the best of San Diego’s buzzing culinary and craft beer scenes.

Craft beer enthusiasts will enjoy two of the best food combinations in the world at Del Mar’s Burgers and Brews event on Saturday, August 12 and Del Mar’s Craft Beer and Pizza Festival on Saturday, August 26. Back again to dish out the best SoCal bites on four-wheels is Del Mar’s Food Truck Festival on Saturday, July 29. Country fans shouldn’t miss “Country Fest,” which includes Del Mar’s famous Chili Cookoff and a concert featuring country-star Billy Currington on Saturday, August 5. Then, barbeque lovers can taste dozens of smoked meats at Del Mar’s BBQ State Championship on Sunday, August 20. Closing weekend will be highlighted by the second Tacotopia at the Track, when 40 of San Diego, Los Angeles and Tijuana’s best restaurants and food trucks compete for our region’s highly sought-after ‘Best Taco’ title on Sunday, September 3.

Some packed-with-fun dates for the entire family start with Sunday, August 6, Del Mar’s Supersized Family Fun Day and Webkinz Horse Giveaway, providing an abundance of engaging activities for little ones. Also, children can enjoy a morning of free donuts, juice and the chance to get an up close look at the Thoroughbreds as they complete their morning workouts during Donuts Day at Del Mar on Saturday, July 29 and Saturday, August 12.

Exactly one month from Opening Day, Del Mar will present its premier race of the summer, the $1-million TVG Pacific Classic, on Saturday, August 19. The mile and a quarter Grade I testing is one of the west’s foremost prizes and eligible to attract several of the best horses in the country. Arrogate, considered by many currently to be the best horse in the world and the winner of the 2016 Breeders’ Cup Classic, is a likely candidate for the Pacific Classic.

After the summer session, there’s major racing to look forward to as the 34th running of the Breeders’ Cup will make history as the 2017 World Championships debut at Del Mar on November 3 and 4. Del Mar’s annual fall meet, the Bing Crosby Season, will bring back the old school cool with seasonal events and concerts from Friday, November 1 through Sunday, November 26.

Summer racing at Del Mar takes place Wednesday through Sunday with the one exception of Closing Day on Labor Day Monday (9/4). First post daily will be at 2 p.m. First post on Friday’s will be 4 p.m. with the exceptions of August 25 and September 1 when the first post is 3:30 p.m. For more information, call 858-755-1141 or visit http://www.DelMarRacing.com. You can follow Del Mar on Instagram, Twitter, and Snapchat at @DelMarRacing or like us on Facebook at Facebook.com/DelMarRaces.