Klar & Klar gear up for expansion, while Knowles will continue to head the next phase of the Ruth Eckerd Hall project with its vibrant and innovative design poised to accommodate a growing patron base. 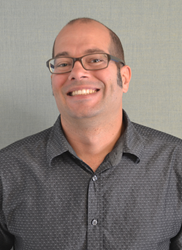 Tim Knowles,Principal and Partner at Klar and Klar, discusses the Ruth Eckard Hall Project the team his working on in the Tampa Bay area.

Our vision was to create a space that is true to Ruth Eckerd Hall’s mission of changing lives through performance.

Renowned Tampa Bay Architects, Klar and Klar, has named Tim Knowles, a long-time architect with the firm, as a partner. Knowles, a Master of Architecture recipient from the University of South Florida, was promoted to partner on April 1, 2017. Since 2004, Knowles has managed both residential and commercial projects for Klar and Klar. Many of his projects have received awards, including the Horizon Award for the 2008 Fire Station 65 in Palm Harbor, Fl. 6 In an effort to both attract more patrons and better serve the community, Ruth Eckerd Hall is receiving another phase in a major facelift from custom architectural and interior design firm Klar and Klar Architects, Inc. As Klar & Klar gears up for expansion on many fronts, Knowles will continue to head the REH project.

“Tim is a remarkable architect with exceptional skills in presentation rendering, 3D computer-based modeling and construction administration,” says Steve Klar, Co-Principal of Klar and Klar Architects. “We were pleased to make him a partner in our firm and continue his momentum with us.”

Tourism is a vital component of the economy in the Tampa Bay area, generating $5.6 billion in revenue and more than 48,000 jobs in 2015.1 Tampa Bay Businesses for Culture and the Arts points out that a 44 percent increase in the number of artists, writers and performers between 2002 and 2012 contributed to the attraction of these tourist dollars.2 Tourism and the arts work hand-in-hand, as nearly 75% of visitors to the State of Florida participate in cultural activities offered in the Tampa Bay area, staying longer and spending 137% more, according to a Florida economic impact report.3

Ruth Eckerd Hall attracts over 350,000 patrons each year for performances ranging from world-renowned classical artists and dance companies to Broadway musicals and pop stars.7 The Hall is part of the $212 million economic impact local non-profit cultural organizations bring in through direct and indirect spending on admissions.2 Together, the non-profit arts and cultural organizations in the Tampa Bay area employ 822 full-time and part-time employees.2

The Ruth Eckerd Hall project includes an almost 10,000 square foot expansion of the West Lobby to better accommodate the existing patrons.4 The design will also be a visual focal point for the entire performing arts campus.

Klar and Klar’s vision for the Ruth Eckerd Hall project focuses on bringing the facilities into the 21st Century.4 For the just-completed Murray Theatre project, the firm worked closely with Ruth Eckerd Hall staff and Creative Contractors in creating a newly expanded and updated look.5 In a nod to the youthful performances featured at the Murray Theatre, Klar and Klar chose a youthful and vivacious design concept featuring a raw backstage theatrical look, complete with Broadway style lighting, wild graffiti walls and vibrant colors. 5

“Our vision was to create a space that is true to Ruth Eckerd Hall’s mission of changing lives through performance,” adds Tim Knowles, Principal and Partner at Klar and Klar. “The space needs to inspire patronage in the extraordinary arts and educational programs offered which are so vital to our local community’s tourism trade and economy.”

About Klar and Klar:

Klar and Klar Architects, Inc. is a full-service architectural and interior design firm located in the Tampa Bay area. Since the firm’s inception in 1992, Klar and Klar’s mission has been to enhance the culture of an area through design excellence and create and build an environment that will sustain the test of time. The firm’s aesthetic focuses on contemporary organic artistic design and integration of energy-saving technology. Roberta S. Klar and Steven Klar, the founders and co-principals of Klar and Klar, emphasize a team approach which enables each member to contribute their ideas and creativity towards the goal of creating a superior product. In 2017, long-time employee Tim Knowles was added as a partner. Klar and Klar have won numerous awards including the 2013-2014 Project of the Year – Structures Award by the American Public Works Association, the National Merit Design Award by The National Association of Housing and Redevelopment Officials (NAHRO), the Excellence in Construction Award by the Associated Builders and Contractors program and the 2011 Business Beautification Recognition Award - Homeless Emergency Project (HEP) by the City of Clearwater and Clearwater Regional Chamber of Commerce.