Used to Fight Infection and Treat Minor Wounds Without the Use of Antibiotics, CUROXEN is Over Five Times More Effective Than Traditional and Natural First Aid Ointments 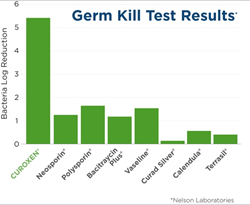 We want to change the way consumers think about the products they use every day to treat relatively minor but important healthcare needs,

Austin, TX-based start-up OrganiCare announced a major win with the on-shelf arrival of CUROXEN (kyur-ox-in) at H-E-B stores throughout locations in Austin, Houston and San Antonio. CUROXEN is the company’s first healthcare product, which effectively upends the traditional OTC (over-the-counter) pharmaceutical product market. While traditional pharmaceuticals rely heavily on the use of synthetics and antibiotics in their products to address minor DIY healthcare needs, CUROXEN represents a first of-its-kind solution with no antibiotics and no synthetic ingredients. The formula is comprised of 100% all-natural homeopathic ingredients that deliver over five times (5X) more germ-killing power to treat every day cuts, scrapes and burns. H-E-B shoppers in Austin, San Antonio, Houston and other regional markets will be the first to try the latest innovation in at-home healthcare.

“We need to put our product on the shelf next to traditional packaged home healthcare products. All consumers need to see that there’s an alternative, a new choice, a better choice. We want to change the way consumers think about the products they use every day to treat relatively minor but important healthcare needs,” said CEO and Co-Founder of OrganiCare, Caroline Goodner.

CUROXEN has been independently lab tested and is proven* to be more than five times more effective at killing bacteria than leading first aid ointments. It is the first product to market by OrganiCare, an Austin-based company founded by two successful serial entrepreneurs, Caroline Goodner and David Shockley. With their combined success in the heavily regulated biotech and medical devices industries, they bring scientific rigor and a keen understanding of regulatory needs to the largely unregulated homeopathic industry. It’s their goal to change the reputation of natural products, which are often viewed as lacking the effectiveness of long standing traditional pharmaceuticals, with a product that’s scientifically proven to work.

OrganiCare is a privately funded start-up company based in Austin, Texas. CUROXEN is their first all-natural, organic OTC healthcare product to be introduced. CUROXEN is currently available online at Amazon and in the First Aid section of all Meijer stores and now at select H-E-B locations throughout Austin, San Antonio, Houston, and other markets. CUROXEN is slated for distribution at Harris Teeter, ShopRite and select independent Good Neighbor Pharmacies nationwide. For a retail location, visit, http://www.curoxen.com/where-to-buy/

*In vitro bacteria log reduction testing was performed according to ASTM E2315, an FDA-recognized standard, by Nelson Laboratories, a certified, independent laboratory. Bacteria levels were measured after one hour of contact with the product. See complete chart of results at CUROXEN.com/science.

About OrganiCare
Founded in 2016, in Austin, Texas by serial entrepreneurs Caroline Goodner and David Shockley. With their combined experience in highly regulated industries including biotech and medical devices, these co-founders bring scientific rigor and standardized testing to the largely unregulated homeopathic products industry. The company mission is to create incredibly effective and all-natural, organic products that address a market need not currently being served in the OTC healthcare space. The company’s first product to market is CUROXEN, a first aid ointment that is all-natural, organic and proven over five times stronger at killing germs than any traditional or natural first aid ointment. Find out more at http://www.CUROXEN.com.