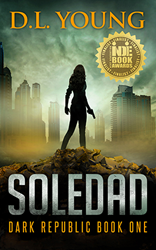 "...a poignant journey with a tenacious protagonist..." -- Kirkus Reviews

Four organizations have awarded prizes this month to D.L. Young for his debut novel, Soledad, a futuristic thriller set in a failed Texas secession.

"I was stunned, to be honest," Young said. "To receive four separate awards within weeks of each other wasn't something I was really prepared for. I've been overwhelmed with the positive response to Soledad since its release, and the awards are a great confirmation of the novel's reception from both readers and critics."

D.L. Young is a Pushcart Prize nominee, award-winning author, and founder of the Space City Critters Writers Workshop. For more on his writing, visit dlyounfiction.com.