Hypertherm, a U.S. based manufacturer of plasma, laser, and waterjet cutting systems and software, today announced the release of its annual Corporate Social Responsibility report. This year’s report shows record results in all areas of CSR including community engagement, environmental impact, and Associate well-being. 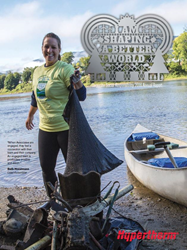 Hypertherm, a U.S. based manufacturer of plasma, laser, and waterjet cutting systems and software, today announced the release of its annual Corporate Social Responsibility report. This year’s report shows record results in all areas of CSR measured by Hypertherm including community engagement, environmental impact, and Associate well-being.

For 2016, nearly 85 percent of Associates volunteered, spending an average of more than 16 hours, or the equivalent of two working days, in the community. Of those, more than 500 Associates, or approximately 45 percent, served at least 24 hours, the maximum number covered under Hypertherm’s paid time off program last year.

In addition to its volunteer program, Hypertherm provided support to nonprofits through its
HOPE (Hypertherm Owners’ Philanthropic Endeavors) Foundation. In all, the organization provided funding to 132 organizations, 25 more than the previous year. Though the foundation continues to support organizations in five focus areas – health and wellness, education, food and shelter, STEM, and the environment – it placed added emphasis on two programs. The first of those programs, SHAPE for STEM, exposed more than 9,800 students to STEM through school tours of Hypertherm’s advanced manufacturing facilities, participation in Hypertherm sponsored robotics teams, and engagement with makerspaces. The second program, launched in response to a substance use disorder crisis impacting states across the country, funded programs in support of drug education, awareness, and sustained recovery.

Last year also saw gains when it comes to environmental goals with Hypertherm diverting a record amount of waste from landfills. The company credits improved partnerships with its supply chain and its award winning regional recycling center with helping it divert more than 2,500 tons of waste. As a result, just 2.5 percent of waste generated by Hypertherm in 2016 went to a landfill, bringing the company ever closer to its goal of zero landfill waste by 2020. The company reports progress on environmental goals tied to its products. For example, its newest Powermax plasma product, the Powermax45 XP, is 11 percent more efficient than its predecessor and 99.9% recyclable.

When it comes to Associate well-being, Hypertherm continues to report workplace injury rates well below the national average. In 2016, Hypertherm had a safety incidence rate of 1.8 percent compared with an industry average of 4 percent, and announced that 7 of its 8 U.S. manufacturing locations are now OSHA VPP Star worksites. The company also reports lower than expected health plan costs, fewer family medical leave and disability claims, and a 35 percent increase in the number of Associates receiving primary care through one of Hypertherm’s on-site primary care clinics. Read the full report at http://www.hypertherm.com/CSR.

Hypertherm designs and manufactures advanced cutting products for use in a variety of industries such as shipbuilding, manufacturing, and automotive repair. Its product line includes plasma, laser and waterjet cutting systems, in addition to CNC motion and height controls, CAM nesting software, robotic software and consumables. Hypertherm systems are trusted for performance and reliability that result in increased productivity and profitability for hundreds of thousands of businesses. The New Hampshire based company’s reputation for cutting innovation dates back nearly 50 years to 1968, with Hypertherm’s invention of water injection plasma cutting. The 100 percent associate owned company, consistently named a best place to work, has more than 1,400 associates along with operations and partner representation worldwide. Learn more at http://www.hypertherm.com.