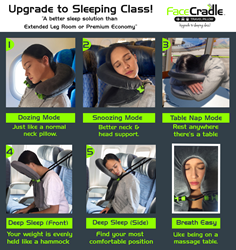 To have FaceCradle on Amazon represents a huge opportunity for us to introduce air travelers to a pillow that will allow them to sleep on both domestic and international flights, presenting first-class comfort while they’re traveling in economy class.

FaceCradle, the most popular travel pillow in crowdfunding history, is now available to appreciative travelers throughout the world on Amazon.

“To have FaceCradle on Amazon represents a huge opportunity for us to introduce air travelers to a pillow that will allow them to sleep on both domestic and international flights, presenting first-class comfort and rest while they’re traveling in economy class,” said FaceCradle USA President Dylan J. Doherty. “Our agreement with Amazon will also allow us to expand our Internet marketing as we roll out FaceCradle to retailers and wholesalers throughout North America, Latin America and territories in Canada.”

FaceCradle is currently available in four colors, black, gray, violet and royal blue, and is priced at $69.99 – with ‘free shipping’ available when ordered via Amazon Prime.

“Unlike other travel pillows on the market, FaceCradle is designed for the way we actually sleep, with our head in a horizontal position,” Doherty said. “Just like our early adopters during our crowdfunding phase, frequent travelers… especially those who fly long, extended flights in coach seats… are finding FaceCradle to be the solution for getting a deep restful sleep during their trips.”

FaceCradle has an innovative internal support frame that’s hinged and splits into two sections – allowing travelers to lock the angle into five different positions to support their neck, head and chest. By utilizing the provided support strap, and securing it around a winged headrest, FaceCradle can be adjusted to several different positions which allow for 180-degree forward use – enabling the traveler to easily find their most comfortable position.

FaceCradle was originally introduced in late 2016 on the crowdfunding site Kickstarter, where nearly 20,000 backers established it as the most-funded travel pillow in crowdfunding history.

It’s introduction on Amazon follows the opening of its new U.S. Headquarters in New York in April, and the announcement earlier this month that FaceCradle USA has partnered with BergHOFF International's North American Division. BergHOFF now serves as the distributor for North America and territories within Canada.

The company’s viral Facebook video, which received more than 18 million views when it was first introduced, demonstrates that FaceCradle’s comfort positions conform to nearly any kind of seating situation aboard a plane, bus, train or even in a car.

To find out more about the most popular travel pillow on the market today and to order, please visit amazon.com.

About FaceCradle USA
FaceCradle USA was founded in 2017, after the success of the product on Kickstarter in the fall of 2016 – when the travel pillow raised $1.135 million ($1,479,231 AUD) to become the most-funded travel accessory in the website's history. The parent company is based in Melbourne, Australia. Two of the country’s seasoned entrepreneurs, David Scrimshaw and Roz Ruwhiu, worked together to create the FaceCradle brand, founding the company in 2015. Scrimshaw is also the founder of one of Australia’s most innovative companies (per Thompson Reuters), having launched the market-leading Power Tool Brand, Ozito. He also designed, developed and marketed more than 30 consumer products globally. Ruwhiu serves as the head of TV production for a leading advertising agency and has been behind the production of several award-winning commercials. The two combined their expertise to create FaceCradle – to help all travelers get a good night’s sleep. For more information, visit http://www.facecradle.me.