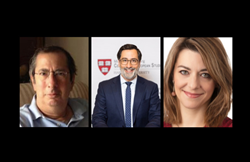 Alexander Görlach is a visiting scholar at Harvard University, a visiting professor at UNAM University in Mexico City, a senior advisor to the Berggruen Institute, and founder of "The European" debate magazine. As a senior fellow for Carnegie Council, he will conduct a project exploring Latin America as part of the West. Diverging from most conceptions of the West today, which explicitly exclude the region, Dr. Görlach sees Latin America as an essential part of what is considered to be the Western hemisphere: marked with a shared past, shared enlightenment, and the reciprocal reception of its philosophy, languages, political system, and religious and ethical beliefs. The project will feature interviews with politicians, writers, academics, and public intellectuals of Latin America in an effort to learn about their perceptions of the West and how to unify the two parts of this hemisphere.

Richard Katz is editor-in-chief of "The Oriental Economist" Report (TOE). He is also a special correspondent at "Weekly Toyo Keizai," a leading Japanese business weekly, and has written two books on Japan. As a senior fellow for Carnegie Council, Mr. Katz is working on a book tentatively entitled, "Reigniting Japanese Growth: The Role of Startups." This includes not just the Silicon Valley-type high-tech firms. It will also emphasize the tens of thousands of unglamorous firms that in most rich countries, but not Japan, play a pivotal role in driving growth in jobs and productivity. In the U.S., 300,000 new firms that grew from around ten employees to an average of just 65 created 20 million new jobs in the past few decades by providing a superior product or process. The book will focus on why creating more start-ups is an indispensable ingredient in the recipe for Japanese rejuvenation; why Japan suffers a dearth of them; and the specific policies it can undertake to nurture more of them.

Marlene Laruelle is research professor at the Institute for European, Russian and Eurasian Studies (IERES) at The Elliott School of International Affairs, George Washington University. She is also the director of the Central Asia Program at IERES and co-director of PONARS (Program on New Approaches to Research and Security in Eurasia). She will lead a Carnegie Council project on Russian influence in French mainstream political parties and institutions. Starting in the summer of 2017, Dr. Laruelle will work with researchers in France to map and analyze connections between French cultural institutions, think tanks, and mainstream political parties and the Kremlin. The project seeks to shed light on Russia's soft power strategies to bolster allied political parties in established European democracies.

ABOUT CARNEGIE COUNCIL
Founded by Andrew Carnegie in 1914, Carnegie Council for Ethics in International Affairs is an educational, nonprofit, nonpartisan organization that produces lectures, publications, and multimedia materials on the ethical challenges of living in a globalized world. Go to https://www.carnegiecouncil.org/.