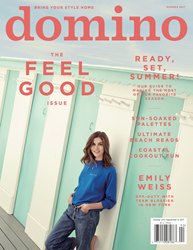 Domino Media Group, the pioneering content and commerce company rooted in home décor, today announced a slate of leadership appointments and a board addition that set the shelter and design media company for (even more) rocketship growth. Domino is already the most innovative and fastest growing media brand in the home space, reaching nearly 5 million monthly uniques on the web.

In his first professional move since departing Mediavest | Spark, a Publicis Groupe company, where he served as Global President, Brian Terkelsen has joined the Domino Media Group board. Domino CEO Nathan Coyle made the announcement. Brian is a pioneering and highly regarded media executive. Among his accomplishments: launching Eco Challenge with Mark Burnett, building ad support for early media ventures such as TV’s CW Network and OWN, and pioneering content as an offering for media agencies such as Starcom and Mediavest.

“I couldn’t be more excited to join Domino’s board,” said Brian Terkelsen. “I’ve watched the design, DIY, shelter space explode and Domino is the clear pacesetter in the category; bringing scale and innovative engagement channels to advertisers. I’m looking forward to working with the Board and helping the company as Nathan and his team build a next generation media and commerce company that showcases beautiful living and design and lifestyle.”

“Brian is the perfect addition to our Board,” said Nathan Coyle. “We’re excited to tap his media expertise and knowledge of the advertiser eco-system. Domino is clearly leading the charge in home and design, which are major passion points for consumers. Brian chose to support Domino because he knows the strength of the category and Domino’s top position and innovative solutions connecting consumers and brands through top quality content and experiences.”

Coyle also is delighted to announce the following appointments and hires:

Jessica Romm Perez, Domino’s Editorial Director since 2015 will be elevated to Editor-in-Chief. Jessica has overseen explosive growth of Domino through its many distribution channels including a quarterly print magazine, Domino.com and the highly regarded Domino app. Jessica’s singular design eye is widely admired in the industry. Prior to Domino, she was Lifestyle Editor at Martha Stewart Living.

Michael Ciancio joins Domino as Executive Creative Director. He most recently led projects for design company Form &. Prior to that, Michael grew and led the design team at Refinery29 and served as Creative Director across editorial, branded content, experiential, digital and brand innovation. Michael has also shaped brand strategies, and designed visual identity systems and marketing campaigns at Wolff Olins for six years, touching some of their most iconic work—Microsoft, 3M, Target, AOL and Citi.

Jamie Weber was formerly controller at Gawker Media. He is coming to Domino as VP, Finance & Accounting with a wealth of experience in digital publishing and media, including stints at IAC and Primedia. Jamie is exceptionally qualified to manage Domino’s fast-growing finances.

Tracy Cho joins Domino as Executive Director of Marketing, Growth and Analytics. Previously, she was Senior Marketing strategist at XO Group and prior to that Marketing Manager at Refinery29. Tracy’s digital expertise also includes positions at UrbanDaddy and Conde Nast.

Hayley Squire comes to Domino from Thrillist Media Group where she was Editorial Email Lead. At Domino, Hayley will be Email Marketing Manager. She previously held positions at Refinery29 and Vector Media New York.

CEO Coyle has also enlisted Sylvie Durlach to represent Domino for ad sales out of the UK and France. Sylvie has a singular expertise in representation of high end titles out of the US in those markets.

“I can’t imagine a better dream team as we catapult toward a next phase of growth,” said Nathan Coyle. “All of these individuals are absolute rockstars, with experience at best-in-class digitally native publishers—Vox, XO Group, Refinery29, Thrillist, Gawker and others. We’re now positioned for even faster growth, offering advertisers unprecedented scale and reach for consumers passionate about design and home.”

About Domino Media Group
Domino is the go-to resource for design lovers who want to bring their personal style home. We inspire customers to create a happy home by celebrating their individuality, providing them with need-to-know information, and empowering them to shop for what they love. Domino magazine is published four times a year and fresh content is updated multiple times a day on domino.com.