Franklin County Visitors Bureau partners with the Capitol Theatre to spotlight local and regional talent as fourteen acts begin a journey to wining $500 and the title of A Cappella & Unplugged 2017 Champion. 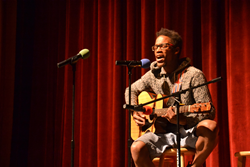 Ta'Von Patterson, Chambersburg, is one of the performers chosen to compete in Round 1 at the historic Capitol Theatre.

Moving out of the 150th commemoration of the Civil War, celebrating the people, who rebuilt Chambersburg, is a main focus. The musical competition is a way of celebrating those people and their incredible spirit.

Auditions are complete, and 14 acts are selected to perform at the 3rd Annual A Cappella & Unplugged ROUND 1 on the stage of the Capitol Theatre, June 17 at 7:00PM. Local judges, comprised by theatre and arts professionals and local celebrities, will select the top six acts, based on execution and skill, originality and creativity, stage presence, and audience response. ROUND 1 is open to the public. Tickets are $15, and now on sale.

A Cappella & Unplugged, held by the Franklin County Visitors Bureau and Capitol Theatre, is designed to bring local and regional talent together in a multi-round event, where the winner is chosen just before 1864 The Ransoming, Burning & Rebirth. A Cappella & Unplugged came about to add more celebration to the annual event, honoring the spirit of the town’s residents, who rebuilt Chambersburg after its burning during the Civil War.

This year’s A Cappella & Unplugged offers a mix of talent, including the a cappella cadence of performers Nicole Baker, Tiana Webber and Amanda Dell, the musical country stylings of Elly Cooke, soulful ballads and songs from Mickey Darr, traditional music of Scott Spielman and guitar and vocal skills by Jesse Landis. Also competing that night will be Joanne Howland of Chambersburg and Dominik Wiesniewski, Waynesboro.

Returning after scoring high last year, Tonya Grissinger, a performer from Chambersburg, and Jason Sheffield, McConnellsburg, will both sing and perform.

Over the past several years, 1864--the light show and story of the ransoming, burning and rebirth of Chambersburg – attracted thousands of visitors. It showed the local events that were part of national history. Moving out of the 150th commemoration of the Civil War, celebrating the people, who rebuilt Chambersburg, is a main focus. The musical competition is a way of celebrating those people and their incredible spirit.

“1864 The Burning commemorates Franklin County’s history,” said Janet Pollard, executive director of the Franklin County Visitors Bureau. “A Cappella & Unplugged celebrates the spirit of the people, who brought Chambersburg to life after the burning. What better way to uplift and remember than with music.”

Starting June 26, Round 2 will begin, when the public will get a chance at voting for its favorite performer on Facebook.com/FCVBen, where clips of the top semi-finalists can be viewed. The top three performers—the contestants with the most likes of their video on Facebook will have a chance to move forward in the competition and perform again on the evening of July 15 as part of the festivities leading up to 1864 before a champion is crowned.

In addition to the grand prize, the champion will perform in front of thousands of people on the steps of the Franklin County Courthouse to open the 1864 light show.

Tickets are now on sale for the event through the Capitol Theatre by calling the box office at 717-263-0202 or online at http://www.thecapitoltheatre.org.

The Franklin County Visitors Bureau invites all to explore Franklin County PA and enjoy the history, arts, recreation, natural beauty, fresh foods and warm hospitality of communities like Chambersburg, Greencastle, Mercersburg, Shippensburg, and Waynesboro. Franklin County PA is located just north of the Mason Dixon Line and an easy drive to Washington DC, Philadelphia, and Pittsburgh. Discover more….plan your visit at ExploreFranklinCountyPA.com , by contacting 866.646.8060 or 717.552.2977.