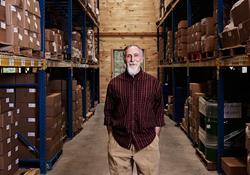 W.S. Badger Co. Inc., the maker of over one hundred certified organic and natural skin care products, recently landed on Forbes’ “Small Giants 2017: America’s Best Small Companies” list. Twenty-five privately owned and held companies from across the nation were recognized for having sound models, strong balance sheets and steady profits, being highly regarded by their peers, and doing things any business can learn from.

“We are really honored to be recognized on this list among so many companies we admire,” said Emily Schwerin-Whyte, co-owner of Badger and vice president of sales and marketing. “This is particularly appreciated because it recognizes the value we place on doing the right thing in business—we see our business as a vehicle for helping us make a positive change in the world.”

According to Forbes, the certifications have helped Badger “codify how it operates. The pay for the highest-paid, full-time employee is capped at five times the lowest-paid, which is $15 an hour (more than double New Hampshire’s minimum wage).” Forbes also notes that the company allows parents to bring their babies to work with them, offers employee profit sharing, and donates 10% of pre-tax profits to charitable organizations.

Companies on this year's Small Giants hail from a wide range of industries, including American manufacturing, and four, including Badger, are certified B Corps. B Corps are for-profit businesses that earn certification from the nonprofit B Lab for achieving certain levels of transparency, accountability, and social and environmental performance. Badger became a certified B Corp in 2011 and became one of New Hampshire’s first businesses in 2015 to register legally as a Benefit Corporation, a for-profit status that incorporates the pursuit of positive environmental and social impact in addition to profit.

ABOUT BADGER
Badger is a family run and family-friendly company that has been making healthy products for people and the planet since 1995. Badger was born when Badger Bill, a carpenter at the time, created a recipe of natural ingredients strong enough to soothe his rough, dry, cracked hands. Now a team of over 100 employees, Badger produces almost all of its products in Gilsum, N.H. Inherent in Badger’s DNA is its status as a B Corp, a certification earned through B Lab, a third party nonprofit that requires companies to meet rigorous standards of transparency as well as environmental and social performance. Badger has been a certified B Corp since 2011 and in 2015 became one of New Hampshire’s first businesses to register legally as a Benefit Corporation, a for-profit status that incorporates the pursuit of positive environmental and social impact in addition to profit. The company recently published its annual report for 2016. A downloadable PDF can be found here.