The ETM Festival will take place at the Lehman Center for Performing Arts in the Bronx on June 6, and June 7 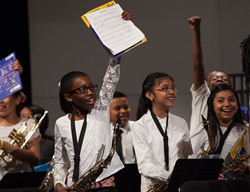 Students from the 2016 ETM Music Festival

We are excited to celebrate the accomplishments of our students at the annual ETM Festival...

Education Through Music (ETM) partner schools will perform at a free concert featuring 8 orchestras, 2 choirs and 17 bands from Manhattan, Queens, Staten Island and Bronx inner-city elementary and middle schools on Tuesday, June 6th and Wednesday, June 7th at Lehman College. The National Anthem and performances will begin at 10:15 a.m. on both days.

Over 1,300 students will represent their schools’ ensembles in a professional performance venue. Students will celebrate their musical achievement, performing alongside their peers for a crowd of school and community supporters. Featured ensembles on June 6, 2017 and June 7, 2017 will include:

“We are excited to celebrate the accomplishments of our students at the annual ETM Festival, our year-end performance showcasing our partner school students’ musical achievements,” says ETM Executive Director Katherine Damkohler. “It is so gratifying to witness the transformation of these students into confident musicians who have devoted themselves to learning their instrument and repertoire. The ETM Festival is the culmination of all their hard work on large-scale concert stage.”