Ziegler, a specialty investment bank, is pleased to announce the successful closing of the $4,400,000 Series 2017 financing for Calvary Evangelical Lutheran Church of Ruskin, Florida, Inc., a new client to Ziegler. 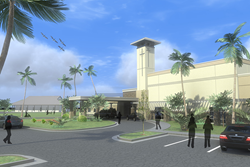 We were very pleased to have assisted Calvary Evangelical Lutheran Church with this financing...The project will be located on 25 acres of land in a very highly visible location in Ruskin, Florida.

Ziegler, a specialty investment bank, is pleased to announce the successful closing of the $4,400,000 Series 2017 financing for Calvary Evangelical Lutheran Church of Ruskin, Florida, Inc., a new client to Ziegler.

Calvary Evangelical Lutheran Church began in 1967 as a mission church of the Evangelical Lutheran Church in America (ELCA). In 1971, the church completed construction of its first facility located on three acres at 5309 North US Highway 41, Apollo Beach, Florida. In 1983, the church added a multi-purpose wing for its expanding ministry. The surrounding community began to experience growth, and therefore so did the church. By 1992, the congregation was rapidly running out of space. To help relieve the situation, a new sanctuary was built in 1993, and the former sanctuary was converted into a fellowship hall. Jack Palzer became the church’s senior pastor in 1994, and continues to guide and lead the growing congregation today.

Current membership has grown to 1,800, with average weekly worship attendance of over 500. Realizing the need for more space and unable to expand on the Apollo Beach campus, the church began to search for a new site, and in 2004, purchased 25 acres of land located at 1424 East College Avenue, Ruskin, Florida, approximately three miles south of the Apollo Beach campus. That same year, the church began serving the community through outreach ministries at the new Ruskin campus with a food pantry and a clothing and furniture donation and resale store, both operating out of a double wide trailer. In 2009, the church constructed a 900-square foot prefabricated metal building for Calvary’s Community Cupboard and in 2013, constructed a 4,000-square foot building for Angel’s Attic Thrift Store. Both buildings are located at the southeast corner of the Ruskin campus. The remainder of the land is still vacant and will be the location of the new multi-purpose building project, along with other tentative future expansion plans of the church.

Proceeds from the sale of the 2017 Series Bonds were used to fund the construction of a 20,000 square foot multi-purpose building which will be divided into three general areas: 1) a multi-use space that can be set up as a sanctuary with 600 seats, as a fellowship or dining area with table seating for 300 people with a supporting kitchen and pantry, or as a gymnasium with basketball or volleyball compatibilities; 2) a community gathering space; and 3) an education area that has the capacity for 140 people. The building will also include storage areas, a music room, office space and paved parking for 230 vehicles. Upon completion of the project, the church will move its ministry operations to the Ruskin campus and continue to use the Apollo Beach campus for administrative purposes.

“We were very pleased to have assisted Calvary Evangelical Lutheran Church with this financing. The church had been in the planning stages for over 10 years and badly needed new facilities. The project will be located on 25 acres of land in a very highly visible location in Ruskin, Florida. The new multi-purpose facility will more than double their sanctuary seating and will provide significantly more ministry space then their current location in Apollo Beach, Florida. Once completed, the new facility will greatly impact the community and we are excited for the future of Calvary Evangelical Lutheran Church,” commented Dave Schlosser, Managing Director in Ziegler’s religion finance practice.

For more information about Ziegler, please visit us at http://www.ziegler.com.

Ziegler is a privately held investment bank, capital markets, wealth management and proprietary investments firm, celebrating its 115th anniversary this year. Ziegler is ranked No. 1 in the country in healthcare/senior living underwriters by issuance and No. 4 by par amount (Thomson Reuters, 2016), and is ranked in the top 20 municipal underwriters in the country by volume (Bloomberg, 2016). Specializing in the healthcare, senior living, education and religion sectors, as well as general municipal and structured finance enables Ziegler to generate a positive impact on the communities it serves. Headquartered in Chicago with regional and branch offices throughout the United States, Ziegler provides its clients with capital raising, strategic advisory services, equity and fixed income sales & trading, wealth management and research. To learn more, visit http://www.ziegler.com.