The sponsored 18-week pilot study, launched in August 2016 in Gujarat, India conducted by USC Project RISHI, concluded with 40% of participants reporting as much as 66% decreased tobacco use and 10% reporting they completely quit using tobacco products altogether while using TeaZa® Energy. 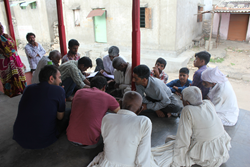 We know from customer feedback that TeaZa® is helping people supplement and even quit their smokeless tobacco habits, and the data from the study concurs with our customer reviews--Brent Agin, MD, President and CEO of TeaZa® Energy

TeaZa® Energy, LLC and its tobacco-free initiative, Operation Tobacco Free (OTF) announces on World No Tobacco Day the results of a sponsored 18-week tobacco de-addiction pilot study launched in August 2016 in the rural village of Naga Valadia in Gujarat, India and conducted by Project RISHI at the University of Southern California (USCPR).¹

“We are thrilled to share the results of USC Project RISHI’s smokeless tobacco de-addiction pilot study,” said Brent Agin, MD, President and CEO of TeaZa® Energy. “We know from customer feedback that TeaZa® is helping people supplement and even quit their smokeless tobacco habits, and the data from the study concurs with our customer reviews,” Agin said.

OTF is a prosocial initiative launched by TeaZa® Energy in October 2015 in response to the growing number of customers who use TeaZa® Energy as a supplement or replacement for smokeless tobacco. OTF serves to discourage tobacco use and inspire healthy lifestyles through education, community outreach and support of youth sports and health programs. TeaZa® Energy is an herb and vitamin tea packaged in a small pouch—similar in shape and size to an oral tobacco pouch, hence its popularity as a smokeless tobacco alternative. It is sugar-free, gluten-free, nut-free, tobacco-free, nicotine-free, vegan and contains zero calories.

Project RISHI (Rural India Social Health Improvement) is a US based, 501(c)3 nonprofit organization established in 2005 whose primary focus is on the sustainable development of rural Indian communities. The organization operates from its ten university chapters and their initiatives focus on health, water and sanitation, renewable energy, education and income generation.

Prior to launching the tobacco de-addiction pilot study, USCPR conducted in-depth research surveys and determined that there is a rampant addiction to smokeless tobacco (chew) in the village of Naga Valadia in Gujarat, India, where the study took place. More than 90% of male Naga Valadia villagers are habitual smokeless tobacco users.³

The 18-week pilot study was entirely run by students and volunteers with the support of a small, local medical team. The study was designed to determine the effects of various tobacco de-addiction aids in combination with basic health education and guidance to wean them off of their traditional chewing tobacco.

About TeaZa® Energy
TeaZa® is an herb and vitamin tea packaged in a small pouch. TeaZa® delivers smooth energy and focus with no crash and provides oral stimulation and hours of flavor to curb cravings for snacks or tobacco products. Pop-it or drop-it for energy and focus—be tobacco free! TeaZa® is available in 9 flavors: Peppermint, Black Cherry, Bangin’ Black Cherry Bomb, Tropical, Spicy Cinnamon, Coffee and Fire; and caffeine free TeaZa® Chill with Relora is available in Cool Mint and Tropical flavors. TeaZa® Energy is produced, packaged and distributed out of Clearwater, FL. TeaZa® Energy is available online in the US and overseas and in select retail locations throughout the US. For more information visit teazaenergy.com.

About Operation Tobacco Free
Operation Tobacco Free (OTF) is a prosocial initiative sponsored by TeaZa® Energy that serves to discourage tobacco use and inspire healthy lifestyles through education, community outreach and support of youth sports and health programs. Launched in 2015, OTF has proudly donated tens of thousands of dollars in product donations and sponsorships through its sponsorship program and Ditch the Dip campaign. For more information visit: TeaZaEnergy.com/OperationTobaccoFree.

About Project RISHI
Project RISHI (Rural India Social and Health Improvement) is a non-profit organization whose mission is to promote the sustainable development and growth of rural Indian communities. In partnership with local community members and social enterprises, Project RISHI identifies issues central to target communities and provides the resources to implement solutions through extensive field research and on-campus initiatives. Originally founded by students at UCLA in 2005; the organization now operates through its ten university chapters. All chapters are under the guidance of a national board composed of physicians, businessmen, and other professionals who were once Project RISHI members. This national team guides chapters through the planning and execution of initiatives. For more information visit projectrishi.org.