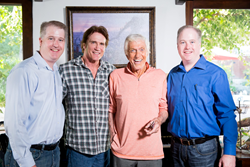 Team behind the film, 'Capture the Flag".

Dick Van Dyke said, "These are actor's dream roles, I would love to play this part."

The film, "Capture The Flag", is a poignant comedy that follows two US Korean War Vets who play a game of 'capture the flag' to determine who wins the privilege of raising Old Glory in their retirement community courtyard every morning. During the game the Vets discover -- and heal -- a shared haunted battlefield memory as they find in each other the courage to soldier on.

Twins Donovan and Adam Montierth team up with Producers Barry Van Dyke and Eric J. Adams to create the feature film adapted from the Emmy Award winning short film, "Reveille". The short film has also won awards at over 20 film festivals worldwide, as well as appearing on the Armed Forces Network and the Pentagon Channel. It's touched a cord with audiences online as it's become a viral sensation with over 10 million views.

"The short film has a built-in and extremely loyal audience in place -- and that is the tight-knit Veterans community. We, in turn, pledge to deliver a heartfelt, comedic and uplifting feature film that also serves as a fitting tribute to the men and women who have served in our armed forces." Adam said.

The filmmakers got a boost recently when they screened the short film for Barry Van Dyke. He read the feature film screenplay, also penned by the brothers, and committed to getting the film made. It was just the spark the indie film needed.

"We've always been impressed with Barry and his work, so to have him come back with such a strong reaction helped validate the importance of the project to us." Donovan goes on to say, "He immediately connected with the fun and heartfelt story."

So much so, that he shared the script with his Father, the legendary actor Dick Van Dyke. And Dick, having served himself in the Army Air Corp for two years from 1944-1945, immediately connected with the story and the characters. To the point where he surprised Barry by asking to play the lead role. Dick told Barry, "These are actor's dream roles, I would love to play this part."

Barry says the response to the project has been incredibly positive. As a result, the team has been able to attach a dream cast by adding Academy-Award-winning actor Louis Gossett Jr., and legendary character actors such as Barry Corbin, John Amos, Rance Howard, and Paul Dooley.

The producers are courting some excellent directors but are keeping their choices under wraps for now. Barry has, however, managed to pick up another Hollywood great by introducing the project to his friend stunt coordinator/ second unit director, Allan Graf.

The filmmakers have pledged to work closely with a number of Veterans organizations to promote Veterans issues, including the Gary Sinise Foundation (garysinisefoundation.org) & Heal the Hero Foundation (healthehero.org). The majority of crew positions to be filled by Veterans in Film & TV (vftla.org).

To find out how you can be a part of this production go to http://www.Film4Vets.com.