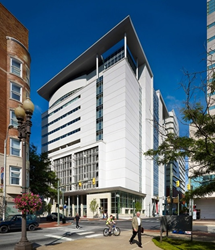 The Harrisburg University of Science & Technology's Academic Center used architectural precast concrete wall panels to blend the parking garage at the building's base with the classroom levels above.

It was important to the project team to create a building that would be an iconic expression for the university and the City of Harrisburg.

The Harrisburg University of Science and Technology is the first independent science and technology-focused, non-profit university to be established in Pennsylvania in more than 100 years. The university was created to address the Capital Region’s need for increased educational opportunities in science, technology, engineering and math (STEM) careers. When it was time to build their new academic center, the university chose precast concrete for various applications in the building’s construction. The university turned to Architectural Precast Innovations (API) in Middleburg, PA to provide the precast concrete components. API is a producer member of the Mid-Atlantic Precast Association (MAPA).

The Academic Center is 373,713 gross square feet and 16 stories high. It includes classrooms, laboratories, administration and faculty offices and a conference center. The center also houses a seven-story parking structure that is nestled between the ground floor and the academic floors. Located on a downtown Harrisburg corner, the site afforded the university the opportunity to create stronger ties to the city and leverage the existing services in the downtown area.

It was important to the project team to create a building that would be an iconic expression for the university and the City of Harrisburg. To accomplish this, they developed a massing strategy that respected the contextual scale of the city by breaking down the massive structure to a scale consistent with its neighbors. To achieve this, precast concrete was used in various applications. Large precast monoliths provide visual support for the cantilevered roof structure, in addition to containing the elevator towers.

Utilizing large precast panels, the team created the relatively joint-less monolithic towers that house the building’s core elements. Unlike a traditional high rise, the center’s design pulls core elements to the perimeter. The resulting massing firmly roots the building while providing an abundance of open “learning commons” space. The learning commons area incorporates an abundance of natural light and offers scenic views of the city.

For the building’s garage, precast concrete panels were used to enclose the garage floors. The panels doubled as barriers and eliminated the need for additional barrier systems. Attached to the garage precast is a decorative screen that conceals the parking garage floors. Its design – a syncopated overlay of perforated metal screen elements – is inspired by DNA maps and hints at the digital aspirations of the institution that built it. The screens also allow natural ventilation of the garage. The screen is attached to the precast by integrating the structural connection points into and through the precast panels. This marriage of screen and precast mimics the bay structure of the neighboring buildings. On the upper floors, articulated precast panels and continuous ribbon windows are used to incorporate contextual materials and complement larger neighbors. While the building respects its surroundings, massing decisions, façade articulation and a distinctive roof profile set the building apart. The design team strived to stay faithful to the aspirations of the university and helped to create an iconic presence on the Harrisburg skyline. The use of precast concrete helped make that vision a reality.

The Mid-Atlantic Precast Association (MAPA) is a professional marketing organization committed to the growth and greater profitability of the Precast Industry in the Mid-Atlantic region. Founded in 1978, MAPA is comprised of 13 prestressed/precast producer member firms located throughout the Mid-Atlantic States, including New York, New Jersey, Pennsylvania, Delaware, Maryland, Virginia, West Virginia and Washington, D.C. The organization is closely associated with the Precast/Prestressed Concrete Institute (PCI) and has over 50 associate member companies that produce a variety of concrete industry related products. For more information, visit http://www.mapaprecast.org.