AbbVie, Novo Nordisk and Takeda Have the Best Reputations Among Pharma Companies According to Reputation Institute Global Pharma Reptrak® Study 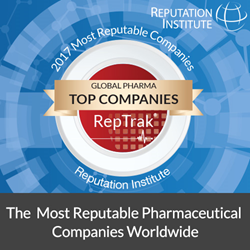 We see that the general public actually has strong positive feelings about the individual pharmaceutical companies which they see as delivering on core expectations within products and services, innovation, and leadership.

Reputation Institute named AbbVie the most reputable pharmaceutical company in today’s release of its annual Global Pharma RepTrak®. The study is based on over 16,500 reputation ratings collected during January and February 2017 among the general public in 8 key markets: Brazil, Canada, France, Italy, Germany, Spain, UK and US.

The reputation of the pharmaceutical industry is improving and is now at a strong level with the general public. Overall, the industry earned a strong RepTrak® score of 71.8, up from 68.2 in 2016. 44% of respondents viewed the industry as having an excellent reputation with a 7% point increase compared to 2016, while 26% perceived it as weak or poor, down from 35% in 2016. “The strong reputation results come as a surprise to many, who expect the general public to be very negative towards the pharmaceutical companies. However, the reputation data tells a different story,” says Kasper Ulf Nielsen, Executive Partner of Reputation Institute. “We see that the general public actually has strong positive feelings about the individual pharmaceutical companies which they see as delivering on core expectations within products and services, innovation, and leadership. This does not match the media coverage, which is very negative, but serves as a good reminder that media coverage does not equal reputation. Reputation is the perception people have, and that is what is captured in the RepTrak® study.”

The Pharma RepTrak® measures the perception of 17 pharmaceutical companies on overall reputation as well as the seven rational dimensions of reputation: products / services, innovation, workplace, governance, citizenship, leadership and performance. Each company is measured by the general public who are somewhat or very familiar with the company.

The top 10 companies in the 2017 Global Pharma RepTrak® are:

AbbVie tops the reputation ranking and saw a strong improvement of 5.3 RepTrak® points since last year. “Since the company’s inception less than five years ago, we have worked to raise a better understanding of AbbVie among our key stakeholders,” said Laura Schumacher, Executive Vice President, External Affairs, General Counsel and Corporate Secretary, AbbVie. “We are pleased that these efforts have resonated with our global audience and driven greater understanding of who we are and what we stand for as a company.”

Investing in a strong reputation pays off. A 5-point increase in reputation results in a 9% increase in recommendation. The benefit of a strong reputation is seen for AbbVie, Novo Nordisk, and Takeda, where 54% of the general public would definitely recommend these companies, compared to only 44% who would do the same for Pfizer and GSK. “In a world where word of mouth is becoming more and more critical, reputation is proving to be a key driver of business success, and that’s why the leading companies are actively measuring and managing it,” says Kasper Ulf Nielsen, Executive Partner at Reputation Institute.

Within the 7 dimensions of reputation AbbVie took the top spot within Workplace, Governance and Citizenship while Novo Nordisk won on the dimensions of Products / Services and Innovation. Bayer was rated as the best company within Financial Performance and Leadership.

The perceptions of the pharmaceutical companies are improving across all seven dimensions of reputation placing 5 of the 7 dimensions in the strong tier. The strongest perception is for Financial Performance followed by Products / Services, Leadership, and Innovation. Governance and Citizenship are the only dimensions, which are still rated in the average tier with scores of 69.2 and 69.5, respectively. Only 1-4% of people hold negative views of the companies across the 7 dimensions, which explain the improvement in reputation overall. However, some individual companies are still struggling with weak perceptions in specific markets, and they are falling further behind as the rest of the industry is improving.