On the eve of their annual conference, the New York State Athletic Trainers’ Association (NYSATA) would like to congratulate it’s National Athletic Training Month (NATM) 2017 contest winners and recognize all of the athletic trainers (ATs) in NYS that took part in promoting the athletic training (AT) profession to bring athletic health and safety into the spotlight – as ‘Your Protection is Our Priority’. 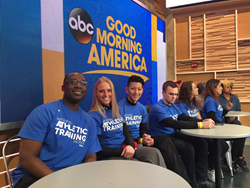 SBU AT Program at GMA in NYC

Many consider athletic trainers (ATs) to be the premier providers of sports health care and each spring athletic trainers and supporters work together to promote sports safety and recognize the athletic training profession during National Athletic Training Month (NATM). Athletic trainers (ATs) are health care professionals who work under the direction of physicians to provide preventative services, emergency care, clinical evaluation, therapeutic intervention and rehabilitation of athletic injuries and related medical conditions, and uniquely understand the critical issue of sports safety. In order to help promote sports safety and the role ATs play, NYSATA and various other AT organizations in NYS celebrate NATM each March and recognize ATs for their efforts. In 2017, NYSATA held their annual Video Contest for AT students in NYS, as well as a new Meme Contest.

The contest drew over 7,600 total votes in two weeks of public voting – nearly 1,000 more than last year. You can still view this year’s NATM ATP videos on our website! In addition to a monetary award toward AT-related student development, the winning ATPs will be recognized at the 2017 NYSATA Conference this weekend in Cortland, NY.

NYSATA’s first annual NATM Meme Contest drew thirteen submissions via its Facebook page. Phil Stamatis, AT for John Jay High School (Hopewell Junction, NY), was the winner of the inaugural event.
In addition to the NYSATA-sponsored initiatives, there were various other NATM events held around New York State. The Stony Brook University (SBU) ATP again organized an NATM trip to NYC on March 3, 2017. This year they had a presence inside the studio for Good Morning America, as well as a coordinated group with NATM signage on the The TODAY Show Plaza.
The Daemen College MSAT Program held its 2nd annual AT “See one, Do one, Teach one” simulation event in conjunction with NATM on March 24, 2017 to engage current students with incoming students. Thanks also to Stephanie Woleben, MS, ATC and Cleon Clayton, MS, ATC for hosting educational and promotional events at Jamestown Community College and the surrounding area.

NYSATA, founded in 1976 and incorporated in 1989, stands to advance, encourage and improve the profession of athletic training (AT) by developing the common interests of its membership for the purpose of enhancing the quality of healthcare for the physically active in New York State. Comprised of over 1,200 certified and practicing athletic trainers, NYSATA is the state-wide affiliate of the regional Eastern Athletic Trainers’ Association (EATA) and District Two of the National Athletic Trainers’ Association (NATA).

NATM 2017: Your Protection is Our Priority