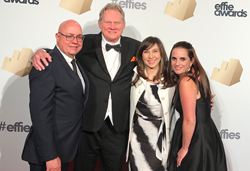 “Calling attention to the issues of stereotyping was an audacious and timely message in today’s environment.

Conill and Procter & Gamble were among the winners of the 2017 North American Effie Awards, earning Bronze honors in the Hispanic category for the Tide brand’s Wash Away Labels marketing campaign. The award was presented at a gala event, held last night in New York City.

The Wash Away Labels campaign centered on the realities Latinos face in today’s society and the negative stereotypes often associated with their countries of origin. Hurtful labels such as Mexicans as “beaners” or Cubans as “balseros” were painted on white T-shirts using ketchup instead of ink. People then washed away these stereotypes by washing the T-shirts using Tide Pods. The resulting stain-free shirts were then emblazoned with positive, more accurate monikers, such as “trabajadores” ( hard workers) and “valientes” (the brave).

“This was a deeply personal campaign for many of our people,” said Conill President Carlos Martinez. “Calling attention to the issues of stereotyping was an audacious and timely message in today’s environment. This award is testament to the power of positive ideas from a bold, uncompromising brand and client.”

An annual program, the North American Effie Awards honor the most effective marketing efforts of the year that represent cases that demonstrate effectiveness in solving a marketing challenge connected with the target audience and successful results.

The Wash Away Labels work can be viewed at: https://conill.com/work/client/washawaylabels

ABOUT CONILL
Founded in 1968 as the nation’s first Latino marketing agency, Conill is currently among the most highly awarded multicultural agencies in the U.S. It has been recognized in Advertising Age’s annual Agency A-List Report in seven of the past ten years, including Multicultural Agency of the Year honors in 2011 and 2007. The agency’s roster of clients includes Aflac, Denny’s, Nationwide, Procter & Gamble, T-Mobile and Toyota Motor Sales.