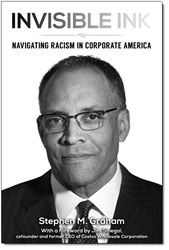 Giving up might be justified, but we do not give up, and, with determination and the support of others, we keep our perspectives and live to triumph.

Author Stephen M. Graham is pleased to announce today the publication of his inaugural literary offering, "INVISIBLE INK: Navigating Racism in Corporate America." Described as a “must read” by one reviewer who wrote that Graham “brilliantly captured the feelings of fear, dismay, anger, self-doubt, shock, numbness and never-ending mind trickery, we [African Americans in the corporate world] go through just trying to do our jobs.”

"Invisible Ink" recounts Graham’s experiences with bias and racism in corporate America against a background of prejudice in the larger society. Unlike racially motivated violence or overt bigotry, racism in the business world is usually subtle, often going undetected unless coaxed to the surface. Such racism is insidious and deeply ingrained in corporate America. Succeeding in this world means battling prejudice on a daily basis, while many white colleagues maintain racial bias doesn’t exist or is of little consequence. Graham’s personal stories reveal the ever-changing contours of a racial bias that denigrates and demeans through continuous, low-grade attacks, grinding down its victims over time.

The author's hard-hitting commentary regarding a world lacking in true diversity sites an example: "of the 50,000 partners in major corporate law firms, only 1.8% are African American, and fewer than that are equity partners." This is played out in an environment where African Americans are continuously subjected to a debilitating undercurrent of bias that too many, on both sides of the divide, pretend does not exist.

Countering this pretending was one of the main reasons why Graham wrote his book. "Invisible Ink" stresses that racism in polite society hasn’t disappeared; it has adapted. It has mutated. There are times when the racist blows his cover, inadvertently failing to use the code, and African Americans in the corporate world are allowed to see the danger. But the disguise is quickly reapplied, the smile returns, and blacks are left to wonder whether their eyes and ears have deceived them; lulled into thinking that since racism is less loud, it must be less prevalent.

Contributing to this false sense are the corporate leaders skilled at saying the right thing while going about business as usual. Although most leaders in corporate America are quick to condemn blatant bias in the larger society, they tend to turn a blind eye to the subtle strains of bias pulsing within their own organizations, doing little to counter their effects. Focused firmly on profit generation, they are unconcerned if opportunity is not allocated fairly, failing to fully appreciate how all bias, the seemingly insignificant transgressions within their own organizations and the more egregious behavior in the larger society, is connected and symbiotic, all contributing to the creation of an environment conducive to racism.

Although the issues addressed in “Invisible Ink” can make for some uncomfortable reading, the book contains an underlying message of hope and strength. Graham notes, "Despite the challenges I have faced due solely to the color of my skin, I have achieved a significant measure of success: Yale Law School; three major law firm partnerships, opening offices for two; a seven-figure income." He continued, "So, where’s the bias, one might ask? Those who ask fail to appreciate that I did not achieve success because of the absence of bias but in spite of its existence. I was strong enough, with the help of some well-timed mentoring and a core group of fiercely loyal clients willing to accept me not only as an individual but also as a competent professional, to absorb the punches and meet the challenges. I refused to quit, and I survived."

Graham concluded, "Giving up might be justified, but we do not give up, and, with determination and the support of others, we keep our perspectives and live to triumph."

That Stephen Graham succeeded in the environment he describes is a testament to his talent and dedication. That such an environment should exist at all is indefensible.

Book Review:
"Overall, his book acts as an effective reminder that prejudice doesn’t have to be obvious to be harmful, and the current political climate makes Graham’s goal—to see an effective, national discussion on race—even more vital."
KIRKUS REVIEW

About the Author:
A graduate of Yale Law School, Stephen Michael Graham is a corporate partner at Fenwick & West, a technology and life science law firm, co-chair of the firm's Life Sciences Practice, and founder and Managing Partner of its Seattle office. Graham serves—or has served—on many nonprofit boards, including the Institute for Systems Biology, Life Science Washington, and the Fred Hutchinson Cancer Research Center. He currently co-chairs the Securities and Exchange Commission’s Advisory Committee on Small and Emerging Companies.