As cities across Europe compete to become the region’s most active FinTech hub, half a dozen are successfully establishing themselves as main destinations for FinTech investments, according to research from FinTech Global, a data and research provider. 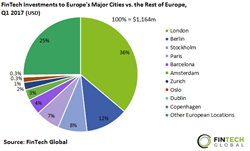 The rivalry between European cities to attract FinTech capital and talent is intense.

Seventy per cent of the total capital raised by all private European FinTech companies in the first quarter of 2017 went to companies based in London, Berlin, Stockholm, Paris, Barcelona and Amsterdam.

More than a third of the aggregate of $1,164m in FinTech investments was claimed by London-based FinTech companies (36% of the total), which was more than three times as much as companies located in the second-placed city, Berlin (12%).

The major change seen in the distribution of investments by city in Q1, 2017, compared to the previous three years, was that Berlin doubled its share from 6% to 12% at the expense of cities ranked outside the European top 10, which fell from an aggregate of 31% to 25%.

Given the economic benefits of developing a vibrant FinTech ecosystem are very attractive, it’s no surprise the rivalry between European cities to attract capital and talent is intense. The figures show London has proven to be resilient to the Brexit vote of June 2016 and that other European cities made huge strides in raising their levels of activity. Whether London can stay so far ahead of the pack after last week’s UK general election remains to be seen as the competition between European cities intensifies further.

The ranking by of the top 10 European cities by total capital invested in FinTech companies in Q1, 2017 is as follows:

The data for this research comes from the Fintech Global database, which provides up-to-the minute intelligence and analytics on trends, deals and companies across all FinTech sectors around the world. For more details please visit http://www.fintech.global