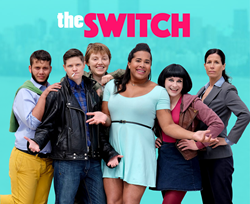 The first transgender sitcom in the history of television, "The Switch: Work, Love, Mortal Danger" is coming to iTunes, Google Play, Revry, and Amazon this summer.

Season One of The Switch follows the story of Sü, a trans woman who flees Trump’s America with the dream of coming out and restarting her life in Canada - only to wind up couch-surfing with her ex, Chris, an adorable ecoterrorist. What follows is a journey of self-discovery and empowerment, as well as dodgy employment, dumpster diving, nosy cops, murdered oil lobbyists, sci-fi hallucinations, and a problematic boyfriend. It’s unashamedly geeky, defiantly hopeful, and proudly political, and above all, it’s funny.

“From fighting anti-LGBT bullying to building community to assassinating oil lobbyists, The Switch is TV’s antidote to the Trump Presidency.”

Showrunner Amy Fox and producer Ingo Lou run Trembling Void Studios. On their seven-year journey to create The Switch, they also produced Time-Warner’s revenge thriller La Quinceañera, and Tear Down the Wall for MTV, among other aggressively diverse indie projects.

“We were tired of downer dramas and biopics. We wanted TV with guts and humor and actual trans and non-binary people. So we made it! Now you can see it.”

Film and TV “about” the trans experience such as The Danish Girl, Transparent, and 3 Generations lacks transgender stars, producers, and often creatives. The Switch changes that by proving that great TV should, can, and now does reflect the real range of humanity. It launches on REVRY June 13th, Amazon on June 19th, iTunes on June 30th, and Google Play on July 15th.

FOR JOURNALISTS: Trembling Void editing staff are happy to cut video or audio content for exclusive use. Onsite taping facilities are available to record remote interviews.

The transgender TV sitcom The SwitchIn addition to cast in poster, 142(2) features Kent Leung as "Russell," and 244 features Raugi Yu as "Nate"

The transgender TV sitcom The SwitchIn addition to cast in poster, 142(2) features Kent Leung as "Russell," and 244 features Raugi Yu as "Nate"