The Mirage Hotel & Casino will host The Woodson Invitational on July 7-9, 2017. Participation & Partnership Packages are available at http://www.coachwoodsoninvitational.com 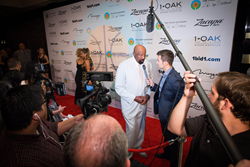 “As coaches, it is our job to help shape the future of basketball, mentoring strong men and women, and helping develop the next generation of young people involved in the game.” - Mike Woodson, Assistant Coach, LA Clippers

The VIP weekend will include celebrity guests, sponsors and VIP’s, blending basketball, golf, fashion and entertainment in support of local and national charities, including Nations of Coaches, a non-profit dedicated to bringing coaches together to create better players and leaders.

“By bringing coaches together, sharing ideas and building strategies, we can help shape and develop even better players,” says Woodson. “As coaches, it is our job to help shape the future of basketball, mentoring strong men and women, and helping develop the next generation of young people involved in the game.”

VIP Packages can be tailored to include golf, hospitality, and invitations to the private parties. For information on VIP experiences call PGD Global: 310.926.4075. For more information, visit http://www.CoachWoodsonInvitational.com.

ABOUT THE COACH WOODSON INVITATIONAL
The Coach Woodson Las Vegas Invitational (CWLVI) is the only summer golf event in Las Vegas where influential sports figures and celebrities congregate. Founded by the former NBA player and head coach of the Atlanta Hawks and New York Knicks, and current Assistant Coach of the LA Clippers, Mike Woodson, CWLVI is the signature summer event in Las Vegas with the mission to give back to the community through sports, celebrity and friendship. All for a good cause, The Coach Woodson Las Vegas Invitational celebrates the world of basketball, while showcasing the best of golf, fashion and entertainment. For more information, visit http://www.CoachWoodsonInvitational.com, like us on Facebook, http://www.Facebook.com/COACHWOODSONinv or tweet @COACHWOODSONinv.

ABOUT PGD GLOBAL
Play Golf Designs, Inc. (PGD Global) is a golf marketing & event company, directing and participating in luxury events for some of the world’s most legendary athletes, brands, entertainers and organizations including Coach Mike Woodson, Julius Erving, Chris Tucker, Jeffrey Osborne, Viacom, The Broadcasters Foundation of America, Diageo and MGM Resorts International. PGD blends pop culture and entertainment, creating the most unique, innovative golf events and experiences for each client. PGD Global focuses on celebrating diversity and inclusion in golf while welcoming women to the game with open arms. Specializing in connecting golf to the modern world of trends and fashion, PGD Global operates golf and lifestyle events and experiences all around the country, welcoming new golfers and businesses to the game. http://pgdglobal.com/. Tweet or Instagram @PGDGlobal or Facebook http://www.facebook.com/PlayGolfDesigns

ABOUT THE MIRAGE (MGM INTERNATIONAL RESORTS)
The Mirage, the hotel that introduced the concept of a destination resort to the Las Vegas Strip in 1989, maintains its preeminent position in what has become an increasingly competitive tourism market. While introducing contemporary amenities designed to retain the resort’s leading edge position, The Mirage has sustained the exceptional service standards and serene tropical atmosphere that have distinguished it as a AAA Four Diamond paradise. Tweet @TheMirageLV @MGMResortsIntl

Mike Woodson walks up the 18th fairway of Reflection Bay Golf Club during the Woodson Playoffs with wife Terri Woodson, friends and spectators