Fukushima on the Hudson by LA Smith Now Available

Nixie Publishing debuts eco-political dystopian thriller in time for summer reading by the water — but is the Water Safe? 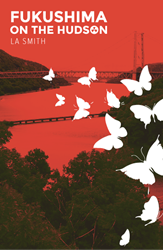 Fukushima on the Hudson by LA Smith Cover

“This is an earth-shattering story — literally — with profound implications for the security of our country. I believe it needs to be told,” says author, LA Smith.

New publishing house, Nixie Publishing announced today the release of Fukushima on The Hudson, a thrilling eco-political novel by author, LA Smith.  Set between a struggling family farm in upstate New York and a cutthroat conspiracy on Capitol Hill in Washington, the novel responds to the question … What would happen if the city of New York faced the very real threat of being washed away in a nuclear meltdown like the one that devastated Fukushima in Japan?

“This is an earth-shattering story — literally — with profound implications for the security of our country. I believe it needs to be told,” says author, LA Smith. At the foreground, Fukushima on the Hudson is the story of two women from two extremely different worlds who persevere through adversity. The first is a very flawed, high-powered Washington lobbyist who is trying her best to do what she believes is right for the country. The other is a hard-working dairy farmer from upstate New York who is grieving the tragic loss of her mom and sister. Country-strong, if politically naive, she finds herself in the power corridors of official Washington, squarely in the crosshairs of political insiders engaged in a high-stakes conspiracy who will stop at nothing to achieve their ends.

The story is rooted in a real existential threat to millions of Americans: Illegally dumped radioactive waste and decaying nuclear power plants, many of which are packed with radioactive spent fuel.  Fictionally, the stage is set and played out in a ‘what-if’ that should be considered quite seriously.  “When I was in the news business, every now and then, I would come across what I called a ‘monster sleeper story.’ An issue or situation that just seemed so ‘big’ and in some cases, so alarming, I couldn’t believe it wasn’t on the front page of every newspaper. For me, the Indian Point nuclear power plant is one of those stories,”  says author, LA Smith.

Bela A. Gary, Nixie Publishing co-founder adds, “this is a book, like A Civil Action by Jonathan Harr or Erin Brockovich by Susannah Grant, that really gets under your skin. Really gets you to thinking about what we are doing to our environment. The legacy we’re leaving our kids. And the heartache of those who are suffering.”

Fukushima on the Hudson is not only for readers who enjoy gripping dystopian thrillers, but also for those who are environmentally aware and supportive of equal rights — for all.    Everyone who may be concerned about a true and existing threat to Wall Street, the city of New York and our country as a whole will want to be sure and read Fukushima on the Hudson by LA Smith.

Sold at AMAZON and iTUNES or visit http://www.nixiepublishing.com

Nixie Publishing is based out of the Washington, DC Metro area in the United States.  The mission of the company is to entice all readers with strong characters or writers that happen to be women that are breaking down barriers and shattering myths with compelling stories.

LA Smith is an award-winning former television news producer who has covered Presidents and members of Congress from inside the White House and on Capitol Hill. During her news career, LA most enjoyed covering people whose stories were rarely, if ever, told.  She has produced a number of series, that include AIDS and its impact on DC children and addicts; a series on bankrupt pension programs and another on toxic waste disposal which exposed the shameful realities of environmental racism and highlighted the cynicism of energy and waste industry executives.