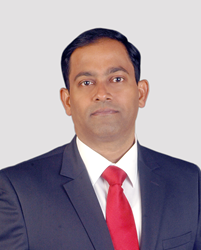 Going forward as Xpanxion’s President, Ram will lead Xpanxion to new heights. His vision of where Xpanxion will go in the future is very much aligned with the vision I hold.

Custom software services provider, Xpanxion has announced that Ram has been named President of the global software development firm. The appointment was made by founder and former President of Xpanxion, Paul Eurek.

Ram will be based out of Xpanxion’s headquarters in Atlanta, Georgia and will be working closely with all of Xpanxion’s branches which include several offices in the Midwest and an offshore location. This organizational change positions Ram as Eurek’s successor.

Ram has been part of Xpanxion leadership for more than 15 years and most recently acted as co-President. For the past several months, Ram has been working with the Xpanxion global senior leadership team to put in place a transition plan that will allow him to work directly with corporate finance, sales, delivery, marketing, human resources, and account management to facilitate a seamless transition while supporting company goals of delivering maximum value for Clients.

Regarding Ram’s new role as President, Eurek said, “Going forward as Xpanxion’s President, Ram will lead Xpanxion to new heights. His vision of where Xpanxion will go in the future is very much aligned with the vision I hold. He will continue to have a focus on honesty, transparency, quality, and most importantly, like me, he believes in the value each employee brings to Xpanxion’s success.”

This reorganization will allow Xpanxion to further implement and utilize the company’s Cross Sourcing™ model, which promotes mixing of onshore and offshore resources to reduce costs, while maintaining quality and communication standards. This organizational change will also bring together the company’s core geographical areas which include the corporate headquarters in Atlanta, Georgia; the offshore office in Pune, India; and the domestic locations in Nebraska, Iowa, Kansas, and Colorado.

“This allows Xpanxion to operate as a truly global organization with a single unified vision for how to best service its Clients,” said Ram.

About Xpanxion:
Xpanxion, a custom software services founded in 1997, is a wholly owned subsidiary of UST-Global, a global technology service provider based out of California. Xpanxion’s unique Cross Sourcing model – combining onshore and offshore talent in Agile development teams – allows Xpanxion to leverage the scalability and cost-effectiveness of offshore resources while meeting the quality and communication standards expected by its clients.