The Center for Information and Study on Clinical Research Participation (CISCRP) is honored to recognize WIRB-Copernicus Group’s generous support of its Chicago event and donation to its clinical research education and outreach programs. 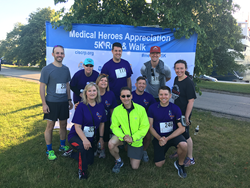 Our founder Ken Getz with members of WCG at our Medical Heroes Appreciation 5k in Chicago this month.

WCG Chairman and Chief Executive Officer, Donald A. Deieso, “CISCRP’s mission fits in so well with WCG’s new patient recruitment initiatives...Connecting patients with clinical trials is an essential piece of the puzzle for clinical research success.”

The Center for Information and Study on Clinical Research Participation(CISCRP), an independent, non-profit organization dedicated to educating patients and the public about clinical research is pleased to thank and recognize WIRB-Copernicus Group® (WCG) for its recent support of CISCRP’s Medical Heroes 5K Run & Walk, held last week in Chicago, and its additional donation to CISCRP’s clinical research education and outreach programs.

CISCRP’s Medical Heroes 5K event, held at Burnham Park in Chicago on June 19th, was a chance for the local community, patients, family members, and professionals to gather and celebrate clinical trial volunteers (“Medical Heroes”) who participate in clinical research and help advance public health. WCG was the top-tier Olympiad Sponsor of the 5K run/walk, and its generous support helped to make it one of CISCRP’s most successful 5K events to date. There were over 350 runners, walkers, and supporters at the starting line, and participants also had access to health screenings, clinical research information, prizes, food, and giveaways.

The following evening, on Tuesday, June 20th, WCG held a reception, “Discovering New Depths of Clinical Research with WCG,” at the Shedd Aquarium in Chicago, in honor of CISCRP. The reception was a chance for attendees to explore the museum, enjoy live entertainment, and learn more about both WCG and CISCRP. During the reception, WCG presented CISCRP with a generous donation to support CISCRP’s many patient education and outreach programs and initiatives.

WCG wanted to show its appreciation for clinical trial volunteers through support of the 5K event and the reception. WCG Chairman and Chief Executive Officer, Donald A. Deieso, commented to reception attendees, “Each year, we use this event to honor an organization that is working towards the same goal as all of us in this room – ensuring the safe and effective development of new therapies to promote human health.” He added, “CISCRP’s mission fits in so well with WCG’s new patient recruitment initiatives: the introduction of iConnect and acquisition of ThreeWire. Connecting patients with clinical trials is an essential piece of the puzzle for clinical research success.”

CISCRP’s Founder and Board Chair, Ken Getz, MBA, remarked, “We are honored that WCG chose to recognize CISCRP’s work with this significant donation. We will use this donation to support and grow our patient and public education and outreach programs to raise awareness about clinical research and the important role that clinical trial participation plays in advancing public health.”

CISCRP is fueled by generous supporters and donors like WCG that wish to recognize CISCRP’s work in the area of clinical research education and outreach. CISCRP is thankful to WCG for its support of the 5K event and for the significant follow-up donation.

ABOUT CISCRP:
The Center for Information and Study on Clinical Research Participation (CISCRP) is a 501(c)(3) non-profit organization dedicated to engaging the public and patients as partners in the clinical research process. CISCRP provides free education and outreach to the general public and patient communities. Visit http://www.CISCRP.org for more information or to support CISCRP’s educational initiatives.

ABOUT WCG:
WIRB-Copernicus Group (WCG) is the world’s leading provider of solutions that measurably improve the quality and efficiency of clinical research. The industry’s first clinical services organization (CSO), WCG enables biopharmaceutical companies, CROs and institutions to accelerate the delivery of new treatments and therapies to patients, while maintaining the highest standards of human subject protections. For more information, please visit http://www.wcgclinical.com or follow us on Twitter @WCGClinical.