The last surviving federal marshal who escorted Civil Rights icon Ruby Bridges to school when she was just six-years-old and schools were all white has just died. The impact he had on her life continues today and is portrayed in an exhibit called The Power of Children at The Children's Museum of Indianapolis. 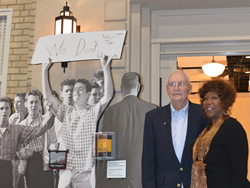 I wish there were enough marshals to walk with every child as they face hatred and racism, and to support and encourage them the way these federal marshals did for me.

“I wish there were enough marshals to walk with every child as they face hatred and racism, and to support and encourage them the way these federal marshals did for me,” said Ruby Bridges, Civil Rights icon. In 2013, on the occasion of the 50th anniversary of the March on Washington, Bridges shared this heartfelt sentiment with Charles Burks, one of the U.S. Marshals who escorted her to school, during a joint visit to The Children’s Museum of Indianapolis.

The Children's Museum of Indianapolis fondly remembers Burks, who passed away on Monday, June 19, 2017, at the age of 95.

The story of Burks and Bridges began in New Orleans, LA in the fall of 1960. Then, 6-year-old Ruby Bridges became one of the first African American students to integrate a school in the American South. Flanked by four federal marshals, Ruby was escorted to school through angry mobs that threw things and yelled racial epithets at her. Ruby’s bravery inspired thousands to stand up for their rights and thousands more to be tolerant; it also inspired Norman Rockwell to create his famous painting, The Problem We All Live With. The story of Ruby Bridges (and her teacher and the marshals who protected her) is told in The Power Children exhibit at The Children’s Museum of Indianapolis.

Responding to Ruby at their reunion in 2013, Burks said, “Like I told my great grandson, this was one of the highlights of my life.” Burks went on to say how he wanted people to know that the Rockwell painting represented much more than the Civil Rights Movement--that there were actual people who have names and families and that their lives made a difference.

Burks definitely made a difference. It had not been his first time dealing with danger or hatred. A pilot during World War II, he was shot down in 1944 and became a prisoner of war in Germany; in 1945 he managed to escape and get back to the American lines. After the war he joined the U.S. Marshals in Hammond, IN, where he was part of a special operations unit trained to deal with the integration of schools.

Burks took part in more than a dozen school integration operations, including at universities in Mississippi, Alabama, and Georgia. His goal was never glory or recognition. He said he was simply doing his job of protecting those who needed it at the time. In Ruby's case, he gave credit to the little girl who helped encourage him through her strength saying, “She never cried. She just marched along like a little soldier. Even though she was going to a strange school with strangers walking alongside her, she was strong.”

It is the museum's hope that the story of Charles Burks, Ruby Bridges, and other courageous people in history can help inspire families today to fight discrimination and intolerance and have a positive impact on the world.

**Photos of Charles and Ruby from their reunion at The Children’s Museum of Indianapolis in 2013 are available here, and video can be found here.

About The Children's Museum of Indianapolis

The Children's Museum of Indianapolis is a nonprofit institution committed to creating extraordinary learning experiences across the arts, sciences, and humanities that have the power to transform the lives of children and families. For more information about The Children's Museum, visit http://www.childrensmuseum.org, follow us on Twitter @TCMIndy, Instagram@childrensmuseum, YouTube.com/IndyTCM, and Facebook.

Charles Burks and Ruby Bridges talk about what it was like before integration.Federal marshal who protected 6-year-old Ruby Bridges as she became one of the first African Americans to integrate a school in the American South.

A hug says a million words as Ruby Bridges hugs former Federal Marshal Charlies Burks.Their story is told in the Power of Children exhibit at The Children's Museum of Indianapolis.