Author Sim Fryson‘s newly released “Here Comes Sim!” is the story of a man who rose from humble beginnings to become a successful businessman and community leader.

“Here Comes Sim!” from Christian Faith Publishing author Sim Fryson is an inspiring biography that begins with Sim Fryson, Senior, a black man of extreme integrity born in the Deep South of Reform, Alabama in 1896. Sim Sr. treated everyone with dignity and respect and expected the same in return; that positive influence created in young Sim a burning desire to grow up to become a man of whom his father would be proud. 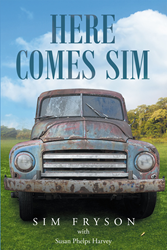 “Here Comes Sim!”: a candid telling of Sim Fryson’s life story, from the challenges faced with grace and dignity by his father in the Deep South to the resilience and determination that enabled him to become a successful businessman, athlete, musician, family man, and community leader. “Here Comes Sim!” is the creation of published author Sim Fryson, a Vietnam veteran, entrepreneur and Seventh Day Adventist Christian who has received many honors throughout his long career for his groundbreaking work and service to his community.

“Here Comes Sim!” That sign adorned the front of an old, beat-up pickup truck belonging to Sim Fryson, Sr., a black man born in the Deep South of Reform, Alabama, in 1896. “There Goes Sim!” read the sign on the back of the truck that Sim used to haul manure, dirt, and coal to help support his large family.
Sim Fryson Jr., or “Simmy,” as his mother called him, was often teased as a child about that battered old truck. But he knew that his father, despite the persecution and prejudice he faced every day, was a man of extreme integrity.

This book is the story of the younger Sim’s life and how he rose from humble beginnings to become the first black American to own multiple car dealership franchises of Mercedes-Benz, Honda, Nissan, and Mazda. As a tribute to his father, “Here Comes Sim!” adorned the front of every car he sold. Among many other honors, he has been listed in Black Enterprise Magazine as one of the top 100 Black Businesses in the country.
Co-writing with author Susan Phelps Harvey, Sim tells his story with candor. Sometimes funny, sometimes awkward, but always honest and true, Sim “tells it like it is,” revealing his teenage escapades, his encounters with famous athletes, and his constant drive to succeed to honor his father’s name.

As Sim gained success, he realized that he hadn’t done it all on his own. God had blessed him. He began to study his Bible as intently and carefully as he had done everything else in his life. Along the way, he developed a new and deeper relationship with God, and discovered Bible truths that challenged him to make profound changes in the way he ran his business. His struggles with his conscience and the miraculous way God blessed his decisions to do the right thing are at the heart of this story. Sim Fryson continues to strive to live his life in a way that honors the memory of his earthly father, and every day he gives all the glory and praise to his heavenly Father.

Published by Christian Faith Publishing, Sim Fryson‘s new book is a powerful testament to the perseverance, determination, and faith that enabled the author to succeed in so many aspects of his life.

View a synopsis of “Here Comes Sim!” on YouTube.

Readers can purchase“Here Comes Sim!” at traditional brick and mortar bookstores, or online at Amazon.com, Apple iTunes store, Kobo or Barnes and Noble.