Park Cities Pet Sitter Will Now Offer Pet Sitting and Dog Walking Services in the 75080 zip code, and portions of the 75081 and 75082 Zip Codes. 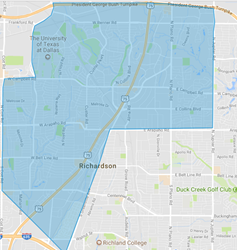 Dallas and Plano Pet Sitting Company, Park Cities Pet Sitter, has just announced they are expanding their service area to include the majority of Richardson, Texas. Beginning July 17th, 2017, the company will begin accepting new client onboarding appointments for pet owners interested in the company’s services that live in the 75080 zip code, those that live west of Greenville Avenue in the 75081 zip code and those that live west of Jupiter road in the 75082 zip code. Actual pet sitting and dog walking services in the new territory will begin the following week, starting July 24th, 2017.

Park Cities Pet Sitter President, Joette White, said there were a number of factors that made this an ideal time to expand the company’s service area. “We have served the Dallas and Plano markets for quite a while but were not sure we could get enough consistent business in the Richardson area in between to keep full time sitters in that area,” said White. “However, the entire I-75 corridor north of LBJ Freeway has been booming over the last couple of years, with a large influx of new businesses and new residents. We have been getting more and more requests to service the Richardson area, and feel like now is the right time to make that leap.”

White also indicated that Park Cities Pet Sitter’s recent win as the National Association of Professional Pet Sitter’s 2017 Business of the Year also made expanding the company’s service area now seem like the right time. “Being recognized by our industry peers with the national Business of the Year award is incredibly humbling, while also being a nice confidence booster,” said White. “It feels amazing to be able to market to the people of Richardson that they can now receive the highest level of pet sitting and dog walking service in the country if they choose to use Park Cities Pet Sitter. We are very excited to see our business grow by serving this new territory.”

According to the 2015 American Community Survey, Richardson’s population included 106,123 citizens, and continues to grow annually. Richardson, Texas is home to The University of Texas at Dallas (UTD), and is also known as the Telecom Corridor® because of its high concentration of telecommunications companies, including AT&T, Verizon, MetroPCS and Texas Instruments.

About Park Cities Pet Sitter: PCPSI has served the Dallas/Plano areas 7 days a week, 365 days a year since 1992, and was recently named the 2017 Business of the Year by the National Association of Professional Pet Sitters. Pet sitting, daily dog walks, pet taxis, overnight sitting, pet supply shopping, litter box cleaning and dog training are all part of the services PCPSI offers. Park Cities Pet Sitter is bonded and insured, and all sitters are employees--not independent contractors. A manager is on-call 24 hours a day to handle any emergencies. Go to http://www.pcpsi.com to learn more.