Scouring the swamp to save Alligator Snapping Turtles

Researchers with the Tennessee Aquarium Conservation Institute are radio tracking Alligator Snapping Turtles to determine if they are an endangered species. 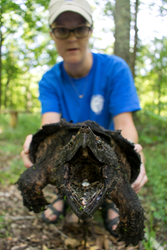 Mary Lou Hoffacker holds an Alligator Snapping Turtle recovered during conservation research in West Tennessee. Scientists are studying the movement and habitat use of these turtles to determine if th

On an unseasonably cool late June morning in West Tennessee, Dr. Josh Ennen carefully works an aluminum boat through a swamp filled with a maze of moss-skirted cypress knees. Harried by mosquitos and stinging flies, he hauls dozens of partially submerged cylindrical hoop nets into the boat through a scum of lurid green algae.

Here in this murky no man’s land an hour east of Memphis, Ennen — a biologist with the Tennessee Aquarium Conservation Institute — and representatives from several partner organizations are hunting for an ancient behemoth: the Alligator Snapping Turtle.

Most of the nets come up dripping and empty, but after two hours of hauling and resetting them, Ennen and his partners return to shore with a pair of juvenile Alligator Snappers.

This isn’t a trophy hunt, though; it’s a catch-and-release safari with a scientific goal.

“If you want to conserve a species, what you want to know first is where they are. Once you know that, you want to know what kind of habitat they use,” Ennen says, holding one of the two turtles, both of which he estimates at between eight and 10 years old.

“That’s what we’re doing here,” he continues. “We want to know ‘How do they use this swamp?’”

Ennen is in the second year of a three-year program to determine the population status of Alligator Snappers. Ultimately, his work, which is funded by a Tennessee Wildlife Resources Agency (TWRA) grant, will help determine whether North America’s largest freshwater turtle should be listed as an endangered species.

With weights topping 150 pounds, the Alligator Snapper is, in every respect, dinosaur-like in appearance. Its fiercely hooked beak, clawed feet and triple saw-tooth ridges running the length of its shell make it appear positively prehistoric. And some are rather ancient. An Alligator Snapping Turtle can live for more than a half century, and at full size, it’s an apex predator in the root-tangled swamps, oxbow lakes and backwaters where it typically is found.

In the 20th century, however, humans harvest removed this massive reptile from the wild in droves to satisfy a booming pet trade and to supply meat for turtle soup.

“By some accounts, these turtles were pulled out of some rivers by the tons,” Ennen says. “When you think about a long-lived animal that doesn’t reproduce that much, populations just can’t rebound as well as something like an insect that has thousands of offspring a year.”

In April 2016, Ennen and representatives from Southeast Missouri State University and TWRA began surveying sites to determine where Alligator Snappers can be found in West Tennessee. They also took blood and tissue samples from the turtles they found to test for concentrations of toxic heavy metals such as mercury, which could indicate degrading water quality in the turtles’ habitat.

This year, Ennen and his partners are using waterproof epoxy to attach radio tags to the shells of turtles they recover. The tags, which can be detected by a handheld receiver, were paid for with a second grant from the Columbus Zoo Foundation. The tags will transmit data for two years, helping scientists to not only track the turtles’ movement, but also how they’re making use of their environment.

The work may not be to everyone’s liking, Ennen admits, but the information they’ll gain is important.

“There’s a lot of wading, a lot of stepping into muck up to your hips. It’s not easy, but it makes it worth it when you catch a guy like this,” he says. “This is an age class of Alligator Snapping Turtles whose movement hasn’t been studied that much. We’ll be filling in some gaps in our knowledge. If this species becomes endangered, this added information will be critical to helping them recover.”

A radio transmitter attached by conservation biologists to the shell of an Alligator Snapping Turtle. Using the signal broadcast by this tag to a handheld receiver, scientists will be able to track thA turtle with a radio tracking device