Behind the Scenes of “Spider-Man: Homecoming” With Digital Compositor Francesco Panzieri 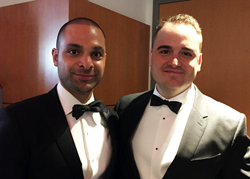 The instantaneous hands-on environment I found myself in during my time at NYFA was a true testament to the preparation it takes to work in Hollywood. – NYFA 3D Animation Alum Francesco Panzieri.

“Spider-Man: Homecoming” is the first installment of a new Spider-Man trilogy created through a collaboration between Sony Pictures and Marvel Studios. Box Office Pro has projected a box office opening of $135 million, which ScreenRant notes would make this the sixth largest opening out of 16 Marvel films.

Along with a great story, Panzieri points to a new colorspace technology created by the Academy of Motion Picture Arts and Sciences called ACES (Academy Color Encoding System) as a significant ingredient to the look of “Spider-Man: Homecoming.”

“It was a cool experience for me to test it for the first time in my career and I look forward to ACES being the soon-to-be-standard on features, episodic and commercials,” says Panzieri.

Panzieri says that it is Marvel’s passion for storytelling that continues to draw audiences to theaters, and also what motivates the long hours and innovation required to create the gravity-defying effects.

“I realized the true strength and secret of Marvel Studios that deservedly brought them to be number one in the entertainment industry: the love and energy that they put into each and every production they make. Everyone who works at Marvel is an extremely genuine, passionate and dedicated fellow; it’s a huge, big family where there is a unique synergy between all the roles," states Panzieri.

Panzieri points to his training at the New York Film Academy as playing a valuable role in preparing him for the transition from film school to major blockbuster productions.

Panzieri explains that visual effects is art, technology and science at the same time, requiring focus, dedication and good at craftsmanship to keep up with the high quality demands in the industry.

"The instantaneous hands-on environment I found myself in during my time at NYFA was a true testament to the preparation it takes to work in Hollywood.”