During a period of change and upheaval in healthcare, Steven Lipstein -- who has led BJC HealthCare for 17 years -- has succeeded in bringing financial stability to his organization and creating an innovative and forward-looking collaborative that is providing high quality healthcare services to communities throughout Missouri and Southern Illinois. 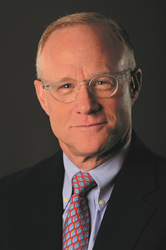 During a period of great volatility and upheaval in US healthcare, Steve Lipstein showed tremendous leadership and forward thinking as he brought financial stability and then growth to BJC HealthCare System.

The National Center for Healthcare Leadership (NCHL), a not-for-profit that works to improve health and well-being by enhancing the capacity of healthcare leaders, is pleased to announce that BJC HealthCare Chief Executive Officer Steven H. Lipstein will receive its 2017 Gail L. Warden Leadership Excellence Award.

“During a period of great volatility and upheaval in US healthcare, Steve Lipstein showed tremendous leadership and forward thinking as he brought financial stability and then growth to BJC HealthCare System, expanding its reach through collaborative efforts to ensure the delivery of high quality care to communities in diverse geographies,” NCHL President and Board Chair Tim Rice said. “With innovation and leadership as driving forces, Steve has been at the leading edge of bringing operational efficiencies to BJC, expanding mentorship and learning programs, and creating wellness activities in his communities, all of which have helped to improve population health and make lasting and significant contributions to the field.”

Mr. Lipstein joined BJC HealthCare in 1999 as President and CEO and in 2013 led the creation of the BJC Collaborative, LLC, serving as Executive Board Chair of the regional multi-hospital system organization. Prior to his work at BJC, Mr. Lipstein was at the University of Chicago Hospitals and Health System from 1994 to 1999 where he rose to the position of Executive Vice President. Earlier in his career, from 1982-1993, he worked at Johns Hopkins Hospital and Health System.

Mr. Lipstein received his Bachelor of Arts from Emory University and his Master of Health Administration from Duke University. He was also the recipient of an administrative fellowship at Massachusetts General Hospital. He is the recipient of numerous honors and awards, including the distinguished service award from the Association of American Medical Colleges in 2015, the 2nd Century Award from Washington University in 2015, election to the National Academy of Medicine in 2014 and named the St. Louis Citizen of the Year in 2013. He is past Board Chair of the Federal Reserve Bank (eighth district) and past vice chairman of the Patient-Centered Outcomes Research Institute. He also sits on the regional board of Teach for America and chaired St. Louis' annual United Way drive in 2016, raising a record amount that exceeded the campaign goal.

Mr. Lipstein will be honored on Tuesday, November 14, 2017 at the Leadership Award dinner at the Palmer House in Chicago. This celebration, which brings together healthcare’s luminaries and notable leaders from the nation’s prominent health sector, academic, and research organizations, will be held in conjunction with NCHL’s annual Human Capital Investment Conference. This year’s conference theme, Science Over Fiction, will focus on the critical role of evidence and objectivity in pursuing greater health for the communities our health systems serve.

ABOUT THE GAIL L. WARDEN LEADERSHIP EXCELLENCE AWARD
Established in 2005, the annual Gail L. Warden Leadership Excellence Award of the National Center for Healthcare Leadership recognizes individuals who have made significant contributions to the health field, including the mentoring of future leaders towards transforming organizational performance to improve health and healthcare. It is named for Gail L. Warden, founding chairman of the NCHL Board, Chairman Emeritus of Henry Ford Health System, and a major proponent of leadership development throughout his career.

ABOUT THE NATIONAL CENTER FOR HEALTHCARE LEADERSHIP
Established in 2001, the not-for-profit National Center for Healthcare Leadership (NCHL) serves as an inter-organizational catalyst to ensure the availability of accountable and transformational leadership for our 21st century healthcare needs. Through its support of inter-organizational learning collaboratives, NCHL pursues a vision to improve population health through leadership and organizational excellence. For more information please visit NCHL’s website at nchl.org.