Record number of licensed naturopathic doctors and students from all over the world to attend this year’s AANP Annual Convention and Exhibition. 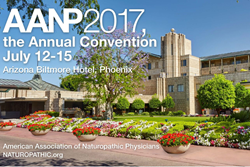 Hosting the WNF General Assembly and the NMSA Annual Conference in one location for the first time is truly exciting...This year, we really focused on bringing the profession together in a way that hasn’t been done before.

The American Association of Naturopathic Physicians (AANP) will once again host its Annual Convention and Exhibition this year at the illustrious Arizona Biltmore Hotel in Phoenix, July 12-15. Licensed naturopathic doctors (NDs) and those in the naturopathic therapies community have not been deterred from the record heat currently affecting Phoenix. Rather, this year’s registration is on target to beat prior years’ attendance.

New this year, the World Naturopathic Federation (WNF) will convene at the AANP Convention in Phoenix for their annual General Assembly, along with the Naturopathic Medical Student Association (NMSA) for its Annual Conference. The three groups will unite for the first time ever to discuss and learn more about evidence-based research, strengthening the naturopathic profession, and safely expanding scope of practice.

The AANP president, Jaclyn Chasse, ND, stated, “Hosting the WNF General Assembly and the NMSA Annual Conference in one location for the first time is truly exciting. We will have ND students, international naturopathic doctors, and those who are local, all in one location. This year, we really focused on bringing the profession together in a way that hasn’t been done before.” Dr. Chasse added that a benefit of having such a diverse group of doctors and ND students is that the Convention becomes a place where new ideas are shared and networking can take place.

The AANP, which emphasizes the importance of diversity and inclusion within the profession, used this as a way to kick-start their new mentoring program. On the morning of July 12, as the AANP Convention opens, attendees will have the opportunity to take part in the AANP Mentorship Networking Breakfast – an event that aims to introduce newer naturopathic doctors with those more established in their careers. “We want to essentially bring people together who might not get a chance to strike up conversation organically. This event will take the intimidation factor out of networking and help first time attendees and those new to the profession make lasting connections with seasoned NDs,” said Jaquel Patterson, ND, president-elect of the AANP.

The AANP Annual Convention is a platform for knowledge sharing, unparalleled in integrative medicine at this time. The AANP Convention program boasts in-depth presentations by noteworthy speakers that focus on healing the whole patient, practice and professional development, and research. A highly anticipated session this year includes the opening keynote by Time magazine award winner for “Innovator in Complementary and Alternative Medicine,” Tieraona Low Dog, MD. Dr. Low Dog will open the Convention with her talk on reductionism, speaking to its strengths and limitations. Convention speakers will also cover topics such as actionable items NDs can do to strengthen their practice, in-depth discussions on research practices, and treatments for autoimmune and systemic diseases.