“Fish Hook” from Christian Faith Publishing author Rich Josephsen is the story of the author’s father through his eyes. Thanks to a childhood of unexpected adventures, Rich learns about God, honesty, bravery, and the importance of giving to others from his father. 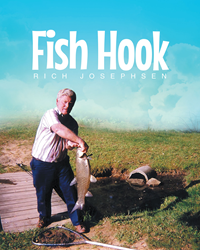 “Fish Hook”: the story of how Carl Josephsen taught his son about God, honesty, bravery, and giving to others. “Fish Hook” is the creation of published author, Rich Josephsen. Rich Josephsen lives in Madison, Indiana. He works at a chemical plant. He is married to Tammy and has three adult children: Jordan, Ashley, and Kalyn. His life has been influenced greatly by his dad. Rich says the greatest thing his father taught him was about his heavenly father.

“Dad knew construction, and when people were in need, he worked on their houses for free. I love talking about Dad, so my voice picked up speed here. The children noticed my engagement and perked up their ears. On one occasion, I helped Dad on a sweet old lady’s roof. I could feel the heat burn through my shoes on that roof. I had a large cup of water that disappeared as fast as I filled it. I also felt Dad’s love for others on several trips to the jail with him. He met their needs unconditionally. He also took no money for this work.” --Rich Josephsen

Rich gets himself into one sticky situation after another. “From hooks to crooks and from lakes to snakes,” is what he likes to say. “Fishhook” tells the true story of Carl Josephsen from the eyes of his growing son, Rich. Through unexpected and surprising adventures, Carl teaches his son about God, honesty, bravery, and giving to others.

For additional information or inquiries about “Fish Hook”, contact the Christian Faith Publishing media department at 866-554-0919.