Synthetic cannabinoids (SCs), which are sold under hundreds of brand names including “spice” or “K2”, have become common drugs of abuse in the US. These man-made drugs are associated with severe central nervous system and cardiovascular effects. 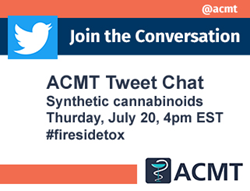 Teens are having seizures, hallucinations and delirium, and those effects can last several days.

ACMT will host a public Tweet Chat about Synthetic Marijuana Abuse and Treatment on Thursday, July 20 from 4:00-5:00pm EST. To join logon to Twitter and search #firesidetox.

Synthetic cannabinoids (SCs), which are sold under hundreds of brand names including “spice” or “K2”, have become common drugs of abuse in the US. The man-made drugs are marketed as “herbal incense” and viewed by many as a legal high. SCs are consumed in a variety of ways including smoking, vaping and drinking. According to the report, the drugs are commonly abused by individuals hoping to evade detection by drug screens, including active military members. After marijuana, SCs are the second most abused illicit drug class by adolescents. However, the use of SCs is still widely underreported due to limited methods of detection.

SCs are far more dangerous than marijuana, partially due to greater potency. Clinical effects are unpredictable due to the wide variety of chemical structures, inconsistent dosing, and variable potency of individual products. “Teens are having seizures, hallucinations and delirium, and those effects can last several days,” said Diane Calello, MD, contributor to this study.

Medical toxicologists participating in the ACMT ToxIC Registry collected 353 cases of SC toxicity (at sites nation-wide) between 2010 and 2015. Of these cases:

In this study, nearly a quarter of patients were admitted to intensive care units. According to Andrew A. Monte, MD, the lead author, “Increased public health education is needed. Expanded and improved testing strategies may decrease use by those hoping to evade detection and would certainly allow bedside providers an opportunity to provide substance abuse interventions.”

The Journal of Medical Toxicology (JMT) is the official print journal of the American College of Medical Toxicology. JMT is dedicated to advancing the science and practice of medical toxicology through the publication of original articles, illustrative cases, review articles, and other special features. Link to JMT webpage: http://www.acmt.net/cgi/page.cgi/journals.html