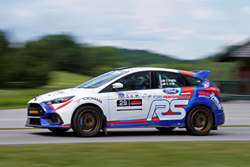 The car, believed to be the first rally-prepared Ford Focus RS in North America, was premiered this past weekend at the Subaru Climb to the Clouds. It was driven to second in the American Rally Association sponsored Rally 1 class by team owner Tim O'Neil with co-driver Chris Cyr. A previous champion and course record holder, O’Neil was able to lower his personal best time up the mountain, setting a time of 7:20.75s. The event provided valuable initial feedback heading to NEFR, which will be the first competitive test of the car on a predominantly loose surface.

“I'm thrilled to have this opportunity to be the first to turn a wheel in anger on a rally with the production Ford Focus RS,” said Comrie-Picard, “Team O'Neill has worked incredibly hard to develop this car into a gravel beast. It's a development effort so our main goal is to get data and provide feedback for further development, but of course we won't be holding back if it's going well, either!”

The New England Forest Rally is an annual two-day stage rally event located on the back roads and logging trails of Western Maine and Northern New Hampshire. The event attracts over 50 competitors from across the US, Canada, and beyond to drive modified, street legal, vehicles on high-speed competitive stages held on temporarily closed roads. The event is sanctioned by the American Rally Association and is the fifth event in their National Championship.

“The Mt. Washington Hill Climb gave us valuable knowledge heading to our first rally with the Focus RS. ACP was an obvious choice to drive given his previous success and engineering knowledge,” said Tim O'Neil, “I like him as a driver because he’s fast, and sympathetic to the equipment. Allowing us to gather the feedback we need.”

ACP is an internationally accomplished driver and entertainer. He is an X Games Rally Car medalist, a Baja 1000 class Champion, and has won the North American Rally Cup overall. From 2012 through 2014 ACP was on 17 consecutive national rally podiums, culminating in the 2014 US National 2WD title driving a Team O’Neil Motorsports-campaigned Ford Fiesta ST. In his time away from competition, ACP works as a Hollywood stunt driver and television host.

“It’s an amazing opportunity to drive a car with a passionate following and vast potential,” said Comrie-Picard, “we saw how fast and reliable it was in its first competition. Hopefully we can improve upon that showing and bring home a victory.”

About Team O'Neil Motorsports
Team O’Neil Motorsports is a division of Team O’Neil Rally School. For the past 20 years Team O’Neil located in Dalton, NH has offered a variety of dirt and gravel road driving courses, including rally driving, winter safe driving, off-road and security courses for individuals, private companies and government agencies. Courses offer educational and recreational experiences appropriate for all abilities. The facility sits on 585 acres of rolling terrain with over 6 miles of stage rally roads, and miles of OHRV and four-wheel drive trails. The Motorsports division offers competition rally car preparation, support and serves as the United States distributor of M-Sport parts and car kits. For more information visit teamoneil.com.