German Professor to Swim and Analyze the Entire Tennessee River

Conservation organizations, including the Tennessee Aquarium, are collaborating on an unprecedented examination of North America's most diverse river. Dr. Andreas Fath will swim the Tennessee River's 652-mile length collecting and analyzing water samples along the way. 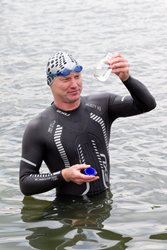 Dr. Andreas Fath takes a sample from the Rhine River

"TenneSwim will make people aware of their influence on the river and how small changes in behavior will have a big, positive effect on water quality." - Dr. Andreas Fath

After breaking the world record for speed swimming the Rhine River from the Swiss Alps to the North Sea in 2014, Dr. Andreas Fath, Professor of Medical and Life Sciences at Furtwangen University in Germany, is preparing for another endurance challenge on the Tennessee River.

Dubbed TenneSwim, Fath’s second “swim for science” will see him swim the entire waterway from late July through August. Fath will conduct daily analyses along his route to determine how water quality in the Tennessee River compares to the Rhine. This project will be the most extensive interdisciplinary water quality survey ever conducted of North America’s most biologically diverse river.

“Water pollution is not only a result of the industrial use of water but also a result of unconscious consumer behavior,” Fath says. “TenneSwim and the outcome will make people aware of their influence. Small changes in their behavior will have a big, positive effect on water quality.”

At 652 miles, the Tennessee River is 112 miles shorter than the Rhine, but its significantly slower current will pose an even greater challenge for Fath. If completed as planned, his swim will break another world record.

In 2014, Fath and his team of scientists analyzed the Rhine for more than 600 substances and found that concentrations of persistent pollutants increased as they moved downstream. “We found the great ‘blockbusters’ in the Rhine,” Fath says, “from artificial sweeteners to residues of dishwasher tabs.” This means many substances we consume or use in our everyday lives survive wastewater treatment and end up in waterways.

During TenneSwim, Fath and his team will sample for common water quality indicators such as temperature, nitrates and phosphates, as well as for pharmaceuticals, hormones, pesticides, bacteria, and heavy metals.

Fath already has one prediction of what he’ll find in the American river.

“The use of lawn fertilizers is much more common in the United States than in Germany,” Fath explains. “That is why I expect significantly higher concentrations of phosphate in the Tennessee River.”

During TenneSwim, Fath will use a technique he pioneered to detect microplastics suspended in the water. These plastic fragments, less than 5 mm in size, are either manufactured at this size or created when larger plastic items break down into smaller pieces. Their small size enables microplastic to enter the food chain at the lowest levels. Microplastic has been found in the digestive tracts of both freshwater and marine animals.

In 2014, Fath and his team found large quantities of microplastics in the Rhine. Fath estimates that, every year, the Rhine carries eight tons of plastic all the way to the North Sea – on its surface alone. “Literally, this is only the tip of the iceberg,” he says. “Actual microplastics pollution in the Rhine is most likely many times higher.”

This leaves many wondering what levels of contaminants and microplastics Fath will discover in the Tennessee River.

TenneSwim is presented with financial support from The Lyndhurst Foundation, Riverview Foundation, PerkinElmer, Sweetwater Brewing Company and a host of German sponsors.

How you can help:
Water covers most of the earth’s surface, but only about 2.5 percent of it is fresh water. Of that, less than 1 percent is easily accessible for human use. That makes every drop — and every individual action that could impact a waterway — critically important. Here are five ways you can safeguard the rivers, lakes and streams near you:

Much more information is available on the TenneSwim Facebook page. Starting July 27, people can follow Dr. Andreas Fath in real-time via GPS tracking.

Dr. Andreas Fath during his world-record breaking swim of the Rhine RiverSwimmer in the river