Thomas Wickiewicz, MD will be inducted into the American Orthopaedic Society for Sports Medicine’s (AOSSM) Hall of Fame on Friday, July 21st, during the Society’s Annual Meeting in Toronto, Canada. AOSSM Hall of Famers are individuals who have made a substantial contribution to the sports medicine field. 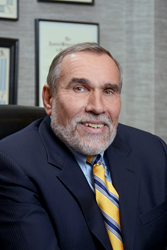 Thomas Wickiewicz, MD will be inducted into the American Orthopaedic Society for Sports Medicine’s (AOSSM) Hall of Fame on Friday, July 21st, during the Society’s Annual Meeting in Toronto, Canada. AOSSM Hall of Famers are individuals who have made a substantial contribution to the sports medicine field.

A native of Jersey City, New Jersey, Dr. Wickiewicz was educated at Saint Peter’s Prep and Saint Peter’s College, and played linebacker for the college football team. He received his medical degree from New Jersey Medical School, completed his general surgery training at The New York Hospital, and residency at Hospital for Special Surgery (HSS) in New York City, NY. Additional training included a sports medicine fellowship with John Marshall, MD at HSS, and a second year observing Frank Jobe, MD at the Kerlan-Jobe Clinic. He also spent time with V. Reggie Edgerton at UCLA’s Department of Kinesiology, where he assisted with research on human muscle.

Dr. Wickiewicz is an orthopaedic surgeon at HSS, where he has practiced for 35 years. He is a professor of clinical surgery (orthopaedics) at Weill-Cornell Medical College, and attending surgeon at New York-Presbyterian Hospital. He served as Chief of Sports Medicine at HSS from 1993-2005. During his time at HSS, he educated more than 164 sports fellows, countless residents, and medical students.

In addition to his practice of knee and shoulder surgery, Dr Wickiewicz has lectured nationally and internationally, and published extensively in both peer-reviewed publications and textbooks.. He has received multiple awards from AOSSM, including three O’Donoghue Awards and the Aircast Award. He also received three Neer Awards from the Society for American Shoulder and Elbow Surgeons.

He is an active member in numerous sports medicine organizations, including being a past president of both AOSSM and the Herodicus Society. He serves on the ACL Study Group and is on the Board of Regents and the Board of Trustees Athletic Committee for Saint Peter’s University. He has also been inducted into the Saint Peter’s Hall of Fame. He has served as orthopaedic consultant to the New York Giants, the New York Knights Arena Football Team, and for St Peter’s University Division I athletics.

He lives in New York City with his wife of 41 years, Catherine Amoroso Wickiewicz. They have two children and two grandchildren.

The American Orthopaedic Society for Sports Medicine (AOSSM) is the premier global organization representing the interests of orthopaedic surgeons and other professionals who provide comprehensive health services for the care of athletes and active people of all ages and levels. We cultivate evidence-based knowledge, provide extensive educational programming, and promote emerging research that advances the science and practice of sports medicine. AOSSM is also a founding partner of the STOP Sports Injuries campaign to prevent overuse and traumatic injuries in kids.