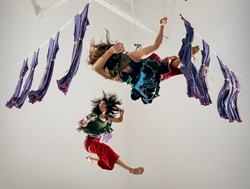 We continue to celebrate the core of the program: creation and touring of new dance work.

The New England Foundation for the Arts has awarded $1,795,000 through the National Dance Project (NDP) to support the creation of 20 new dance works that will tour the United States.

Now in its third decade, NDP is widely recognized as one of the country’s major sources of funding for dance. NDP’s signature approach provides funding for both the creation and touring of works. A panel of national dance leaders, including artists and presenters, selected these projects out of 126 competitive applications through a two-round process. The choreographers and companies from around the country include nine U.S. artists who are first-time NDP grant recipients as well as one international collaboration. Each project will receive grants ranging from $40,000 to $45,000 for the creation of the new work, plus $10,000 in unrestricted general operating support for each artist recipient. A total of $665,000 will be awarded to U.S. organizations to present these works when on tour.

“As a result of program and field research, NDP is moving forward with program design changes, including increased professional development, piloting a community engagement fund, and ways to incentivize presenters in areas that have not seen as much dance, and we continue to celebrate the core of the program: creation and touring of new dance work,” said NEFA executive director Cathy Edwards.

NDP has invested more than $36 million in funding to artists and organizations to strengthen partnerships and bring dance into communities across the U.S. To date, NDP has supported the creation of over 412 new choreographic works that have toured to all 50 states and Washington, DC, reaching over 2.8 million audience members.

To learn more about the grantees and their projects, visit the directory of NDP projects with tour support available on http://www.nefa.org, look for the August 2017 National Dance Project publication available in early September, or contact program director Sara Nash at 617.951.0010 x512 or snash(at)nefa(dot)org.

About NEFA
The New England Foundation for the Arts invests in the arts to enrich communities in New England and beyond. NEFA accomplishes this by granting funds to artists and cultural organizations; connecting them to each other and their audiences; and analyzing their economic contributions. NEFA serves as a regional partner for the National Endowment for the Arts, New England’s state arts agencies, and private foundations. Learn more at http://www.nefa.org.